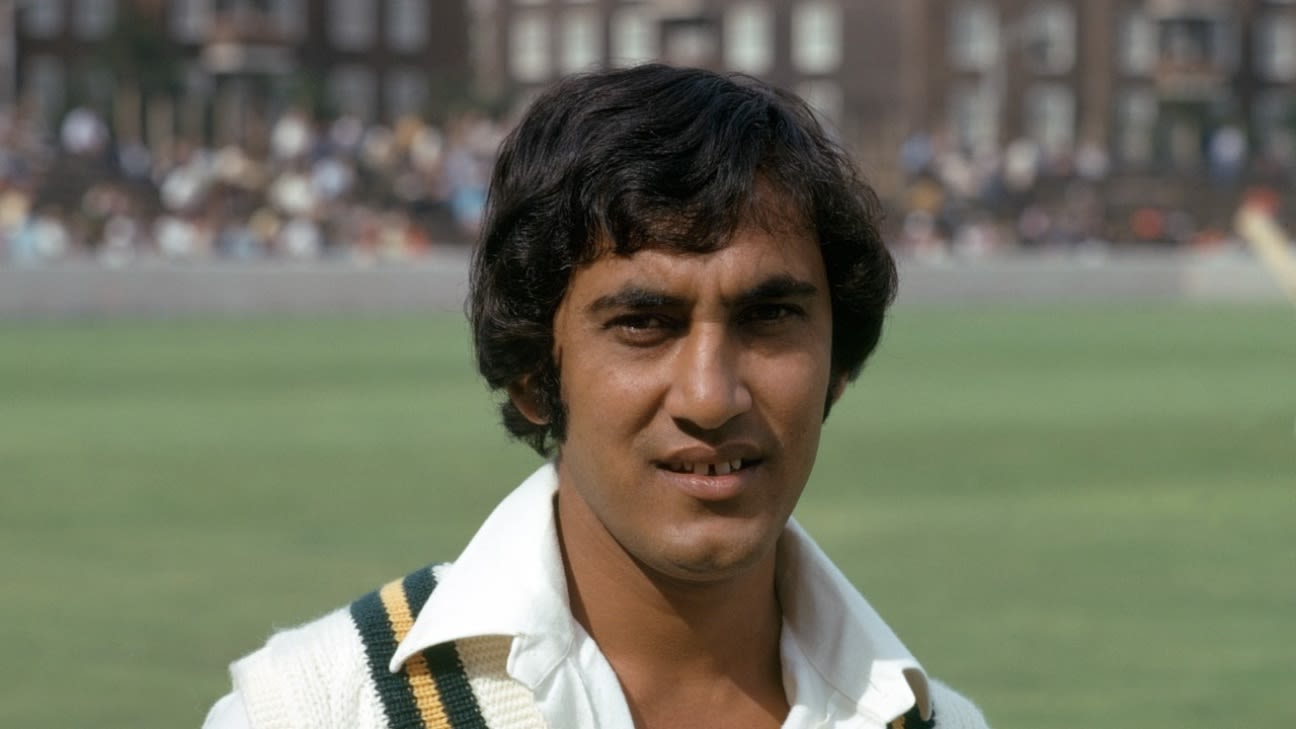 , a domestic giant from the 1970s, maker of Pakistan's second domestic quadruple ton, and a batter who could have played more than his two Tests for Pakistan, has died. He was 68 years old.
Baloch is probably best remembered for the he made as captain of Sindh against Balochistan in Karachi during the 1973-74 Quaid-e-Azam trophy. He added 174 for the fifth wicket in that game with a young Javed Miandad, playing only his eighth first-class game. It remains the only made by a Pakistani in first-class cricket other than Hanif Mohammad's legendary 499, made 15 years before that.
But there was much greater pedigree to Baloch beyond that one innings. His father had played for Gujarat and Maharashtra in the Ranji Trophy in pre-partition India. And Aftab's first-class debut as a 16-year-old was testament to his talent: he scored an unbeaten 77 batting at number nine, and took 12 wickets in an easy win for PwD (Public Works Department) over Hyderabad Blues in August 1969 in the Quaid-e-Azam trophy.

Miandad's presence in the 428 match, however, was significant in that it was testament to the depth in Pakistan's batting during that decade, a depth that kept Baloch out of the side. Between the 1972-73 season and the 1977-78 season, Baloch was at his peak: he scored 5025 runs in Pakistani first-class cricket, averaging nearly 55 with 14 tons.

At the same time, Pakistan had a batting order built around Sadiq Mohammad, Majid Khan, Zaheer Abbas, Asif Iqbal and Mushtaq Mohammad - and then, eventually, Miandad himself. It was among the strongest batting line-ups Pakistan has ever had in Tests.

In those peak years Baloch enjoyed considerable success as captain of a strong National Bank side. He led them to the Patron's Trophy title in the 1974-75 season and then a double of the Quaid-e-Azam trophy and the Patron's Trophy again the very next season. The next season he again led them to the finals of both tournaments, though this time they lost both (on first-innings scores rather than outright defeat). Baloch scored three hundreds across all those finals.

In the midst of that run, he did at least get a Test, against the visiting West Indies at in February 1975. It was his second, after a debut in 1969, and he did well: he hit an unbeaten 60 in the second innings against a pre-great West Indies attack that still included Andy Roberts and Lance Gibbs. It was to be his last Test, in a side that would two years later become a serious force on tours of Australia and West Indies.

"I am deeply saddened to hear the passing of Aftab Baloch, who was one the most popular cricketers when I was growing up," PCB chairman Ramiz Raja said in a statement. "I not only had the privilege of watching him in action, but also played against him in the twilight of his career.

"As he was a close friend of my late brother Wasim Hasan Raja, I knew him well outside the field of play and always admired him for his passion, love and understanding of the game. He was gentle, friendly and caring, and had qualities that made him a widely respected and loved person."

Thiem set to miss the remainder of the 2021 season due to a wrist injury.,

Join us for updates, analysis and colour from the first day of the fourth Test

"He's been cleared by all the medicos and he's obviously gone through all the concussion...

Sultans smoke Qalandars on the back of Shahnawaz Dhani's...

Rafaâs left-handed serves which won 59.6 per cent of his second-serve games, topping...

Swiatek is having an outstanding start to the new season.

Mitch Perry makes his mark by removing Steven Smith as...

Pat Cummins has a swing before Australia declare on 556