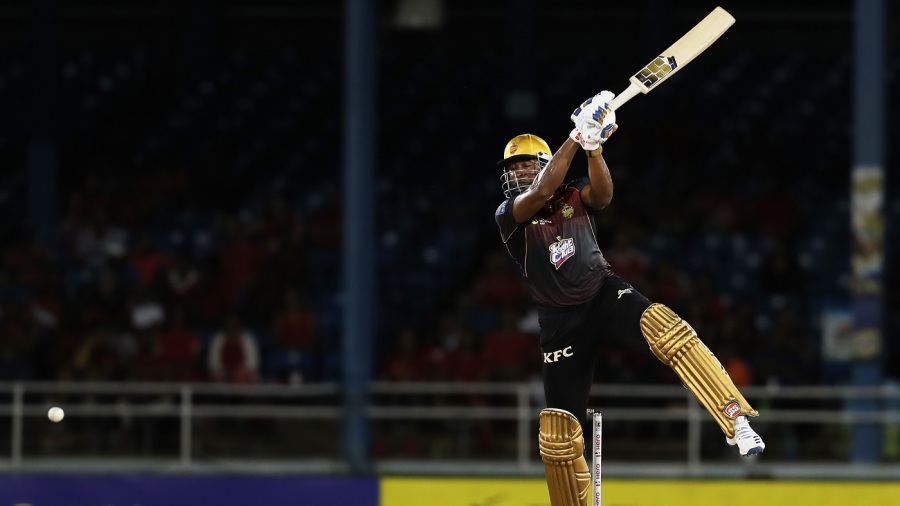 It had to take something extraordinary to end Guyana Amazon Warriors' unbeaten run this CPL and it nearly arrived in the form of a belligerent half-century. But his 38-ball 71, and Trinbago Knight Riders' 75 off the last six overs in the chase of 186, weren't enough as they fell short by 19 in the end. It extended Amazon Warriors' stellar run to eight straight wins and confirm a top-of-the-table finish for them with two matches in hand.

With Pollard hitting big mercilessly in front of a packed home crowd, the decisive over was the 19th when Knight Riders needed 38 from 12 balls and it looked very much on the cards with the wet ball difficult to grip for the bowlers. However, kept his nerves and even though he did not get all his yorkers right, and dropped Pollard at long-on, his stifling lines allowed only nine from the over to leave Knight Riders with 29 to get from six balls. Malik had kept the experienced Imran Tahir for the last over and the legspinner did his bit by conceding two singles on his first three balls to effectively seal the chase, topping it with Pollard's wicket on the fourth ball.

Offspinner opened the bowling with four straight overs to finish with 2 for 18 with 11 dot balls. His mix of offbreaks and seam-ups accounted for Lendl Simmons and Colin Munro cheaply, before Denesh Ramdin holed out to bring Pollard and together in the ninth over when the hosts were crawling at under a run-a-ball and the asking rate had shot to over 12 per over. Bravo and Pollard spent only two boundary-less overs before launching into the Amazon Warriors attack that had to keep using the towel on the ball to get their accuracy right.

Both Pollard and Bravo targeted the 'V' - with Pollard's net much wider - as the captain pulled, lofted short-of-length balls over the covers, dispatched the fuller ones down the ground, and targeted Ben Laughlin, who had conceded only three runs in his first two overs. He started the 15th with Knight Riders needing a stiff 95 from 36 and Pollard and Bravo smashed two sixes and a four on the leg side to collect 18. After clubbing another 14 runs off , Pollard brought up his 27-ball half-century in the 17th over by hammering the ball over bowler Paul's head, and 12 from that over left Knight Riders with 51 to get from three overs.

With Shepherd's quota over, Malik had one over each left from Laughlin and Paul, which meant he had to give one to a spinner. He decided to bowl Laughlin first, who conceded another 13, but Paul's effort in the 19th meant Tahir had a cushion of defending 28 in the last over, and he did it comfortably.

Hemraj sets the stage for Shepherd

Knight Riders' decision to bowl looked the right one when they dismissed Brandon King early and kept Amazon Warriors' Powerplay score to just 35 for 1 with and Shimron Hetmyer hardly taking any risks. Apart from the odd leg-side six from Hemraj, Ali Khan's pace and Khary Pierre's tight lines delayed the batsmen's charge, but with some luck. Hemraj was dropped twice: the first one a tough return chance for the bowler Pollard, who nearly injured his right hand in the attempt, and the second was for substitute Tion Webster, who ran in from long-off only to spill a simple chance. Hemraj had already clubbed a six and a four after the Pollard drop, and this time he collected two fours off Chris Jordan right after the second miss to shoot their run rate from under seven to nearly eight per over, with a 34-ball half-century. Hetmyer, meanwhile, wasn't looking in his element and played second fiddle to Hemraj for a 38-ball 48 in a second-wicket partnership of 98.

Amazon Warriors were on course for a massive total, at 111 for 1 in the 14th over, before Javon Scantlebury-Searles interrupted their charge. Bowling for the first time this CPL in five matches, he first accounted for Hemraj for 66 before dismissing Nicholas Pooran and Hetmyer with wide yorkers in his next over, but by leaking 15 runs between the two dismissals. When Malik fell for a duck - caught by Scantlebury-Searles - and Sherfane Rutherford for 1 in consecutive overs, it looked like they would end on a below-par total, being 143 for 6 with 17 balls to go. But Shepherd, batting at No. 7, heaved sixes over the midwicket fence in the last over off death-overs specialist Jordan, the second off a waist-high no-ball which gave the batsman the chance to smash the free-hit to the wide long-on boundary for a four. With 25 runs off the last over, Shepherd finished with 31 off 13 balls and might have given Amazon Warriors the extra margin they eventually won by.

Nathan Lyon comes in from the ODI cold to press his World...

Tennis - Lee is married to the former World No. 1

Tennis - Jannik is the best player born in 2001 on teh Tour, reaching the semi-final...

Bangladesh were in the hunt for a series win at 110 for 2, but were bowled out for...

Novak Djokovic spoke about the successes of Japanese tennis

Bavuma hits out at double standards in transformation debate

FIFA.com looks ahead to the final round of qualifying matches for the 2019 CAF Africa...