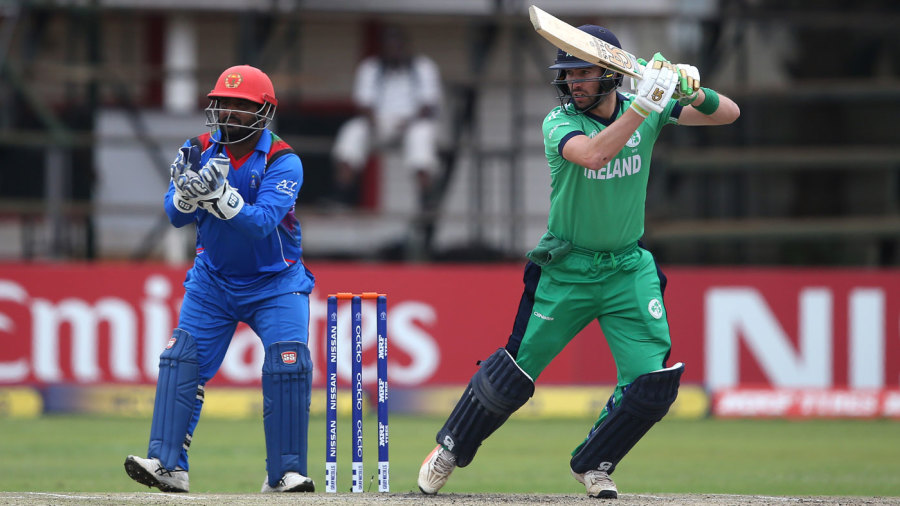 A brilliant hundred from steered Ireland to a four-wicket win over Afghanistan in the third ODI in Dehradun. The convincing victory meant Ireland levelled the five-match series 1-1 after the second game was washed out.

Chasing 257 on a sluggish wicket, Balbirnie smashed eight fours and as many sixes during his unbeaten 136-ball 145 to take his side home with one over to spare. Earlier, Afghanistan recovered from 74 for 5 on the back of 's maiden ODI hundred and a composed 75 by captain to post 256 for 8. But as it panned out, it wasn't enough.

Ireland didn't have a great start to their chase, though, losing William Porterfield to Mujeeb Ur Rahman in the third over before Dawlat Zadran dismissed Paul Stirling and Simi Singh in the eighth over to reduce the visitors to 29 for 3. Balbirnie and Kevin O'Brien took the side to 73 before O'Brien mistimed a juicy full toss from Samiullah Shinwari to Asghar at mid-on, and it looked like Afghanistan were cruising towards yet another win.

Balbrinie and George Dockrell had other plans, though. The duo batted sensibly - Balbirnie doing most of the scoring, while Dockrell concentrating on rotating the strike - to put that chase back on track. Playing with only four frontline bowlers didn't help Afghanistan's cause either. While Shinwari picked up a wicket, his ten overs cost 60 when Ireland were on the back foot.

Balbirnie used the sweep shot to good effect against the Afghanistan spinners, hitting 93 of his runs on the leg side. While the required rate kept increasing slowly during the partnership, it never really got out of the hands with Balbirnie finding boundaries at regular intervals.

The 143-run stand came to an end when Mohammad Nabi got Dockrell stumped for 54 in the 43rd over. Ireland still needed 41 from the last seven overs, four of those overs belonging to Rashid Khan.

Rashid conceded three and four respectively off the 44th and 46th over but with 16 needed off 16, Balbirnie swept the legspinner over deep midwicket for his eighth six of the match to dash any hopes of an Afghanistan comeback. In the next over, he crunched Dawlat through extra cover to level the scores before slicing him over short third man to take his side home.

Earlier, the Ireland bowlers had Afghanistan in all sorts of trouble. While Mohammad Shahzad fell lbw to Murtagh, the incoming batsmen couldn't adjust to the slow nature of the wicket. A big offbreak from Andy McBrine trapped Rahmat Shah in front, Hashmatullah Shahidi chopped Cameron-Dow onto his stumps, and Any Balbirnie took a brilliant hand-handed catch low to his right at first slip off Geroge Dockrell to send Samiullah Shinwari back. In between Hazratullah Zazai was run-out courtesy a direct hit from Murtagh.

With score 74 for 5, Asghar stretched out to a James Cameron-Dow delivery, only to be beaten by the turn but Stuart Poynter fumbled behind the stumps and missed an easy stumping. Asghar was on 18 then.

That proved to be the only chance Ireland would get in the next 25 overs as Asghar and Najibullah not only stabilised the innings but also set the base for a strong finish. Asghar who started slowly got to his fifty off 82 balls before hitting offspinner Simi for back-to-back sixes.

Boyd Rankin eventually broke the 117-run stand in the 44th over when he dismissed Asghar for 75 but Najibullah's fireworks ensured Afghanistan finished with a flourish. Najibullah was on 52 off 75 when Afghanistan lost their seventh wicket at the score of 193. But the left-hand batsman smashed three fours and four sixes in the next 23 balls to double his score and finished unbeaten on 104 off 98.

The shift in momentum started with Najibullah reverse-pulling Simi Singh for a six off the last ball of the 45th over. In the next two overs, he heaved Boyd Rankin over square leg for another six while Tim Murtagh's successive full tosses were smoked for a four and a six.

Najibullah's efforts, though, ended in vain as Balbirnie dissected the chase with surgical precision.

Polkinghorne: The Matildas have a little book club going

Gunathilaka shows why Sri Lanka stuck by him

The Sri Lanka captain has been lauded for letting his batsmen play their shots,...

T20 Finals Day sells out in a fortnight as Edgbaston builds...

Demand for Blast higher than at any point in 17-year history, in spite of advent...

Looking past Kohli as captain could be a risk, but it comes with the potential for...