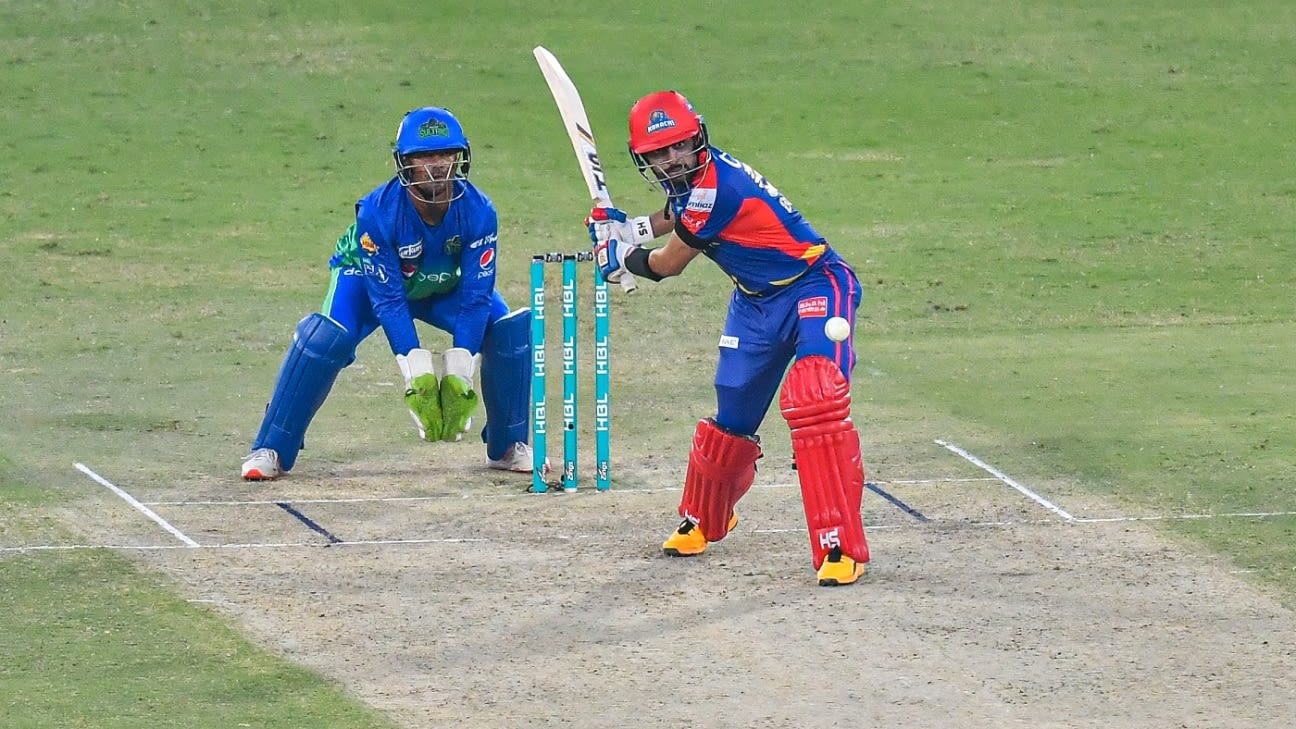 Karachi Kings did what had been on the cards for most of the game. They edged out Multan Sultans to reach their first final in PSL history, but boy did they take the scenic route! When they required 26 off four overs with seven wickets, including , still in hand, it looked like a Karachi cakewalk. In the end, Multan would take it to a dramatic Super Over, but set 14 to win, bowled a near-perfect Super Over, for Shan Masood's side to fall five runs short.

Winning the toss, Karachi opted to bowl, with the decision paying dividends almost from the outset. Wickets fell swiftly, with Adam Lyth dismissed early and a couple of run-outs, one brilliant, one farcical, further strengthening Karachi's position. Multan's mini-recovery from 40 for 4 to set Karachi 142 to win - thanks to cameos from Ravi Bopara (40) and Sohail Tanvir (25*) - ensured there was still life in the game.

But Karachi had Babar, who's scintillating form, combined with support from Alex Hales at the other end, appeared to be guiding them to a straightforward win. But, as happens in this format so often, Babar failed to close it out, and when he edged behind in the 17th over, panic suddenly set in for Karachi, who were a batsman light.

Four wickets fell for six runs, with veteran Tanvir turning in an outstanding bowling spell. Multan seemed to be closing in on a stunning win, before a priceless little knock from , capped off with a boundary off the last ball to send the game to the Super Over, allowed Karachi a lifeline, which Amir gleefully accepted.

Snubbed by Pakistan and with his international career in limbo, Amir responded in the most befitting way to show Pakistan what they might be missing. He might not have picked up any wickets with the ball, but one of the run-outs he effected was responsible for altering the course of the Multan innings. When Zeeshan Haider slapped him back down the ground, Amir had the presence of mind to stretch his toe so it made contact with the ball before cannoning into the non-striker's stumps, leaving Masood stranded.

In the Super Over, he put on a magnificent exhibition of death bowling, nailing the yorker ball after ball to Rilee Rossouw, who simply couldn't find a way to get underneath one. Only six runs came off the bat, with Multan never allowed the faintest chance to threaten the target. It was Amir at his match-winning best.

Chasing all those below-par targets against Zimbabwe in the T20 series looks to have been decent practice for Babar. The 141 Multan put up didn't look enough for a pitch that was very conducive to batting, and just as Babar had punished Zimbabwe for failing to rack up the runs, he didn't spare Multan either. Easing, with characteristic inevitability to his fifth consecutive half-century, he extended his lead at the top of the PSL run charts with 65 off 53. But once again, he will rue failing to finish the game off, and it nearly cost him until Wasim bailed him out at the death. A canter suddenly turned into a nail-biter, and Babar really had no business letting it.

It might be harsh to say it, but Karachi did almost nothing special with the ball, and yet found themselves having restricted Multan very efficiently. That was partially down to some suicidal running by Rossouw, whose importance to Multan had grown exponentially since they lost a couple of early wickets, one to a freak Masood run-out at the non-strikers end.

But Rossouw had no one to blame when he was run out two overs later, setting off blind with no clue where exactly the ball was. Zeeshan Ashraf rightly sent him back, but he was so far down the keeper had time to throw it to the bowler, who was backing up at the striker's end, and whip off the bails with time to spare. Rossouw has been instrumental to whichever PSL franchise he has been a part of, and when he fell that cheaply, it felt like a big moment. It was.

Karachi are through to the final, while Multan will play an eliminator tomorrow against the winner of Lahore Qalandars and Peshawar Zalmi, with the winner joining Karachi in the final.

Quetta crash out of HBL PSL 5 despite win over Karachi

Attentions are beginning to turn to the Test summer with the key quick saved the...

After bowling well to Babar, I can counter any batsman...

After bowling well to Babar, I can counter any batsman in the world: Shaheen

He will have scans in Tauranga on Thursday

Injuries a worry for India as battle of top-class Test...

Rohit Sharma will open for India, while Will Pucovski is expected to make a highly...