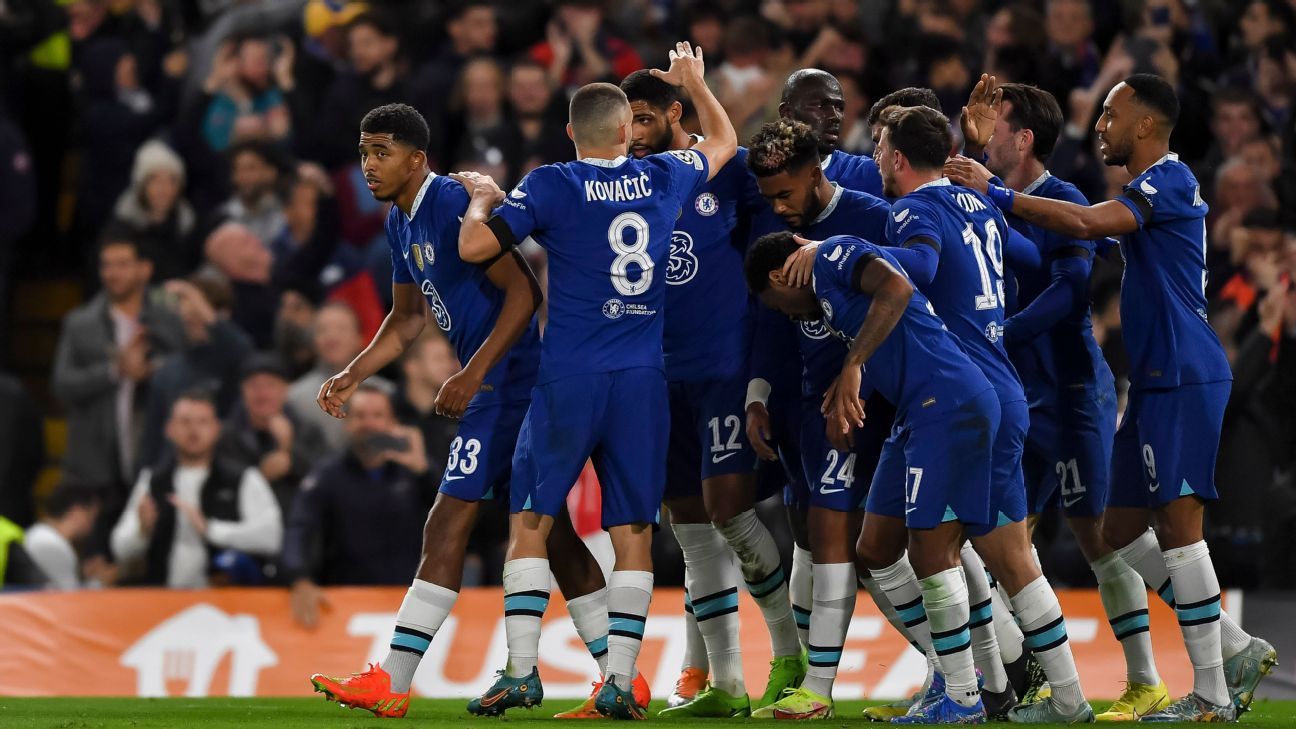 LONDON -- kept their Champions League hopes alive with a dominant over at Stamford Bridge on Wednesday.

opened the scoring for Chelsea with his first-half goal in the 24th minute, but was forced off injured just 14 minutes later. AC Milan had spells of possession but it was Chelsea who took charge of the match in the second half with goals from and .

That allowed Graham Potter to empty the bench and enjoy his first Champions League victory in charge of Chelsea, but more importantly, it was their first win in the competition this season and keeps them in the mix for a spot in the knockout stages.

Potter did not get much of a chance for a settling in period at Chelsea. The 1-0 defeat to in their opening Champions League match of the season, in what proved to be Thomas Tuchel's final match in charge of the club, put Chelsea on the backfoot. In Potter's first match in charge, they only managed a 1-1 draw with at Stamford Bridge which meant tonight's was a must-win for Potter -- lose and their Champions League hopes would be left hanging by a thread and reliant on other results.

But Potter's Chelsea delivered. This was by far their best performance of the three in his tenure as they pressed and pulled AC Milan all over the pitch. While the Serie A champions had some decent chances, Chelsea controlled much of the match and you can see the team growing increasingly familiar as a group under Potter's charge. It's a philosophy based on overloads, and attacking at the right moments at blistering pace. This group are suited neatly to that with the likes of James, Sterling and Aubameyang all fantastic.

The two central midfielders in and played well in a pair, switching up who heads forward and who holds back. And then there was the veteran at the back who was magnificent. It was his trio of headers from successive set pieces in the first half which triggered the eventual scramble to allow Fofana to score his first for the club and Chelsea's opener.

And importantly, kept a clean sheet in the Chelsea goal. With Edouard Mendy fit again having missed Potter's first two matches, it was going to be fascinating to see who started and it was Kepa, who was so often second-choice under Tuchel. Whenever Kepa was called upon, he did what was needed.

Chelsea's front three clicked against AC Milan. Though is yet to score this season, you can't imagine Potter is going to change things up much after seeing his front three gel like they did on Wednesday evening.

Aubameyang put in his best performance yet in a Chelsea shirt on his third appearance as his movement constantly pulled AC Milan's defence out of position. He grabbed his second in as many matches with a neat finish off the back of James' cross in the second half.

Elsewhere, Sterling and James are working brilliantly down Chelsea's right side with the two frequently overlapping one another. It was his assist which saw James finish confidently from close range for Chelsea's third. The medium-term picture on the other flank is still a little ambiguous what with on the bench and Chelsea having a wealth of attacking talent, but Mount and dovetailed well against Milan.

One of Potter's first main tasks will be to get Mount's confidence back up. Mount will be desperate to get off the mark this season for Chelsea but it's not for want of trying. He had a shot well-saved in the first half and another effort -- a neat chip -- ruled out due to being offside.

Chelsea made an enquiry about AC Milan's attacker Rafael Leao in the summer, and you can see why he's one of Europe's most sought-after talents. He had moments of breath-taking skill, but he's far more than just a box of tricks. His movement makes him so hard to pick up -- twice in the first-half he glided through half of southwest London into the Chelsea penalty area. The second dart past Reece James -- no mean feat -- resulted in Charles de Ketelaere having his shot parried by Kepa and offering a great chance, but he was unable to convert from eight yards out with the net gaping on the stroke of half time. He also had one eye-catching dart in the second half to leave Thiago Silva in his wake but his attempted pass to was intercepted.

Of course the sight of watching Leao dancing through a defence is nothing new to the followers of Serie A and AC Milan. He's been exceptional for Pioli's side. He was instrumental in their charge to the Scudetto last term, and already has four goals and four assists in seven Serie A matches this season. But Leao's ability was there for all to see and if the Premier League is to be an eventual destination for the 23-year-old forward, then this was a superb audition.

While Leao was the focus of much attention, there was also an eye on 's homecoming. He was a youth product at Chelsea but left the club for AC Milan in 2021 and has established himself as an indispensable part of their team. He played well on his return to Stamford Bridge and was definitely one of AC Milan's more impressive performers on the night but will be frustrated at being unable to cut out James' cross for Aubameyang's goal.

Aubameyang, Sterling, James and Loftus-Cheek all played well, but the defender was superb at the back. The 38-year-old was the first Chelsea player to really get close to Leao and it was his barrage of headers in the first half that gave Fofana a platform to score their opener. He was superb.

There are a few candidates from AC Milan here, but Krunic really struggled. Ben Chilwell kept him quiet and Krunic squandered AC Milan's best chance of the match on the stroke of half-time as he failed to convert from a few metres out.

It had to be him! Pierre-Emerick Aubameyang haunts his old club Milan.

France, Germany on top as Spain and China squeeze through

Glazers say they are open to selling Man United

Mithali Raj: Younger players 'have shown they have the...

"I definitely know my playing composition for the first couple of games and I look...

Pakistan are set to host SL, tour Australia, and play Ireland home and away as well...

Smriti Mandhana: 'Never felt I would experience a day-night...

Before she can think of the pink ball, however, her immediate focus is on tackling...

The former India women's team coach has been drafted in for the upcoming home series...

Joe Clarke signs with Melbourne Stars for the BBL

Notts opener joins Stars for the full season after a brief stint with Scorchers...