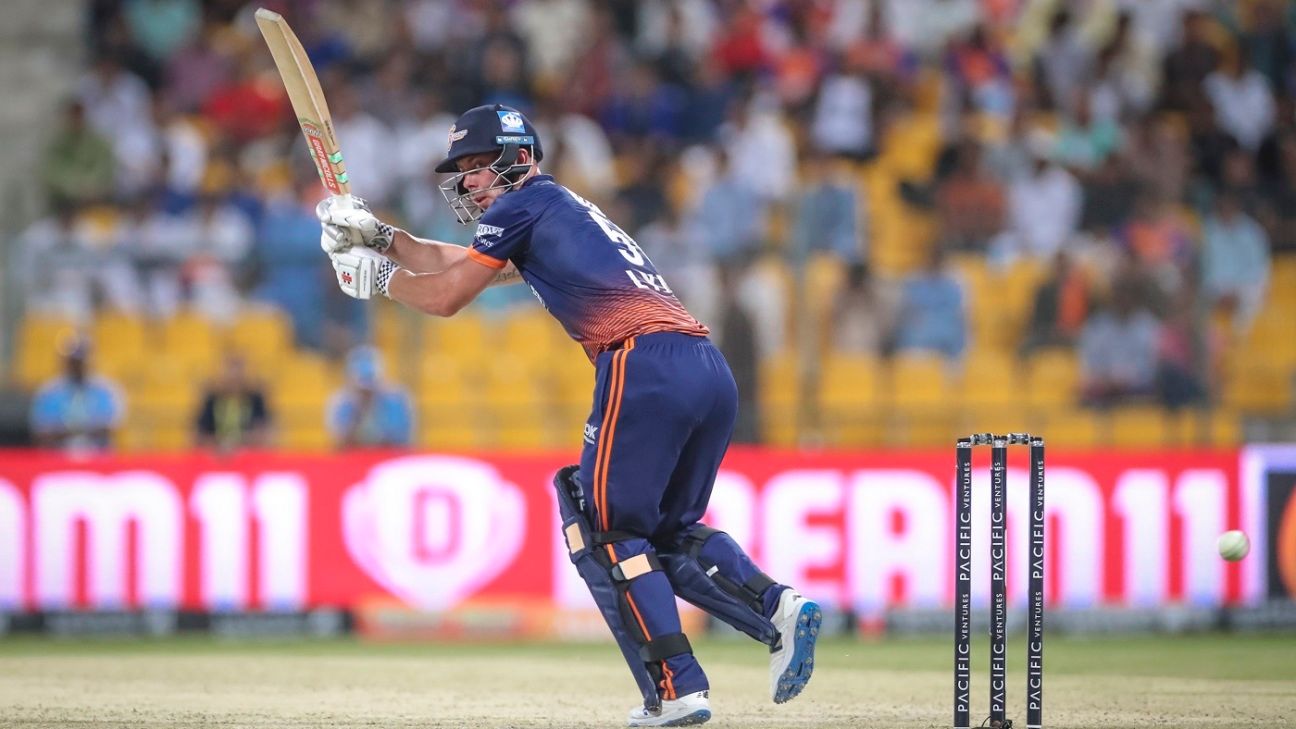 came painfully close to becoming the first player to score an Abu Dhabi T10 century on , and said afterwards that there is ample opportunity to go nine runs better over the tournament's remaining six days.

The 29-year-old struck a blistering unbeaten 91 from a mere 30 balls, containing a total of nine fours and seven sixes, at a strike rate of 303.33 for Maratha Arabians. Lynn broke Alex Hales' record of in the ten-over tournament - also made while playing for the Arabians in 2018.

He could have had the century had it not for being relatively starved of the strike towards the end of the Arabians innings. After smashing Harry Gurney for three fours and two sixes in the seventh over, Lynn was well placed with 82 from 26 balls.

But the opener faced only four of the last 18 balls of the innings because of a combination of Adam Lyth (30 off 18) demolishing Marchant de Lange in the eighth over and being unable to get Lynn back on strike quickly in the penultimate over.

Lynn started the final over on 87 as the non-striker, unable to get down the other end until the final ball of the innings, which he hit for four.

"Obviously when you get a bit closer, you want to get [to a hundred]," Lynn said. "But the guy at the other end [Lyth] was hitting boundaries as well. So to get 138 on that wicket was a really good job.

"It would have been nice to get the first hundred of the T10 but that's the way it goes and there are plenty more games in this tournament to try and get another opportunity to do that. We'll just see what happens."

Lynn's team-mate hailed the knock as outstanding. "It's a sign of how the game has evolved that guys are getting close to scoring a hundred in a T10 game," Yuvraj said. "It's amazing how the game has changed over the years.

"He [Lynn] is someone I have seen in the IPL. He has given some great starts to KKR [Kolkata Knight Riders]. I really don't understand how . I think that's a bad call, must send SRK (Shah Rukh Khan, the franchise owner) a message on that."

It has been a discussion often broached over the course of the T10 format's emergence as to whether an individual century is possible, prompted by league owner Shaji ul Mulk offering up an apartment to the first centurion at the start of the inaugural season in 2017. Luke Ronchi top-scored with 70 that year, with the idea gaining real momentum in 2018.

First, Sherfane Rutherford struck a hundred in a warm-up match that season before Mohammad Shahzad's from just 16 balls - an innings only brought to a premature end as the Rajputs chased down 95 in four overs - suggested it would be a matter of time before someone scored a T10 hundred.

Hales, Jonny Bairstow (84*) and Rovman Powell (80*) went on to break the 80-run barrier in the second season as players inched closer to scoring a century.

Will Jacks - a team-mate of Rutherford for Delhi Bulls this year - further greased the wheels by hitting a hundred in a ten-over contest for Surrey against their County Championship counterparts Lancashire at the ICC Academy in Dubai back in March. But the tournament's move to Abu Dhabi seemed to imply that batsmen would struggle to get near that mark in 2019 due to slow, tacky pitches as well as the long square boundaries.

Lynn, however, had other ideas, hitting relentlessly to all parts of the ground on a fresh pitch described as "amazing" by Abu Dhabi's captain Moeen Ali and one that proved not to be as two-paced as the others used across the first three days.

Lynn's innings showed that as the tournament enters its second group stage, the race to become Abu Dhabi T10's first centurion is well and truly back on.

"We know there are players in the competition who can [hit a century]," Moeen, the man trying to counter Lynn's onslaught, said. "I'm sure it's going to happen very soon. There's a great chance [of it happening] if somebody gets in."

India fined 80 percent match fees for slow over rate against...

Misbah upbeat ahead of PSL5

Atletico return to their roots with throwback win over...

Atletico return to their roots with throwback win over Liverpool

Djibouti on the march under Mette

Djibouti moving in the right direction with Mette

Sinclair: The support for my record was incredible