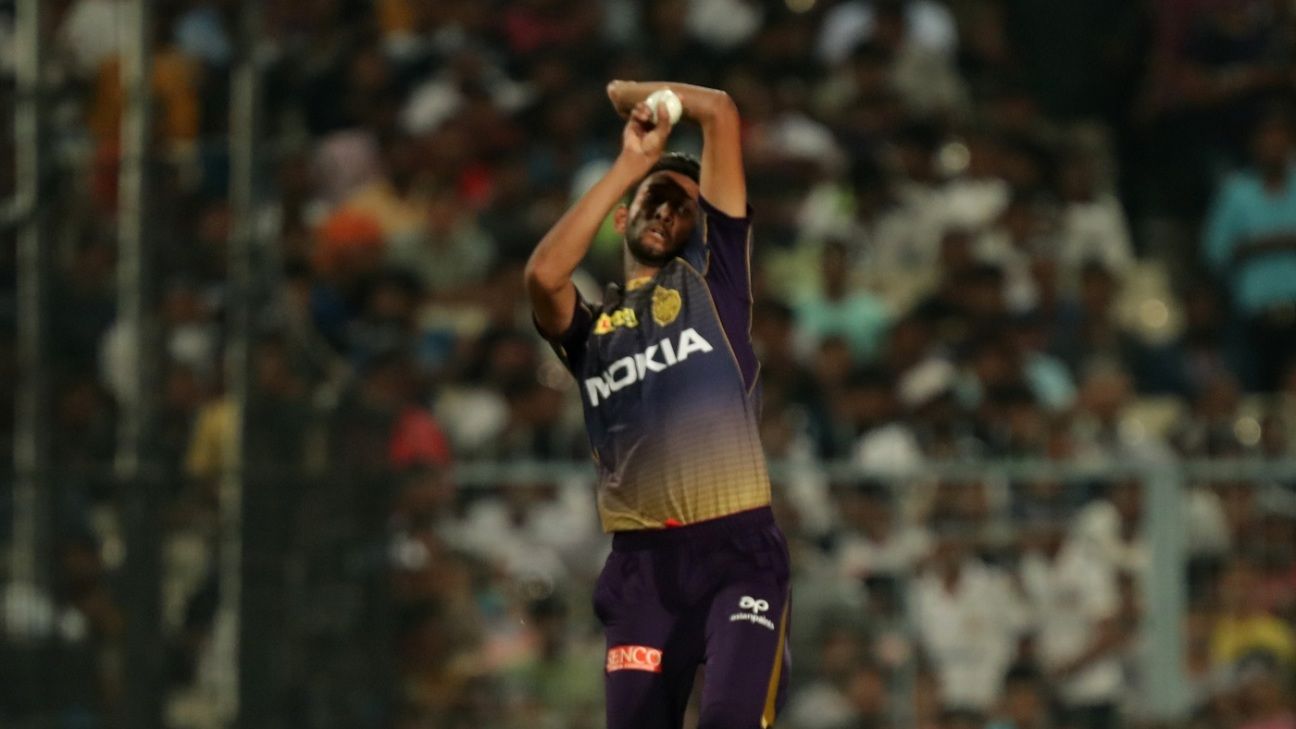 There must be something special about a 23-year-old bowler with limited experience if he is asked to bowl the Super Over in a high-stakes IPL game. Dinesh Karthik turned to in Kolkata Knight Riders' match against Delhi Capitals, and the paceman conceded just ten runs, with just the one four, and sent back Shreyas Iyer. , but that's another matter. Prasidh had made a mark in just his tenth IPL appearance.

"Initially I was very happy, since the team trusted me to do the job. The result depended on that one over, so I was very happy, I enjoy taking responsibility for the team," Prasidh, in Bengaluru for Knight Riders' next game, said. "It was a task given (to me). I think I did pretty well. We ended up on the losing side, but we still have lots of positives to take."

Knight Riders had lost the services of local pacemen Kamlesh Nagarkoti and Shivam Mavi to injuries well before the tournament began, and South Africa's because of a shoulder injury closer to the start of the action. That left the pace resources in the ranks looking rather thin, and though a few replacements have come in, Prasidh has got a start in all three games his team has played so far, and been impressive.

As the numbers below suggest, he is at his most economical in the middle phase of games in the IPL, but at his best in terms of wicket-taking ability at the close. And, really, 9.58 isn't terribly bad considering the way most end overs go in T20 games.

"It feels really nice as a bowler, as a youngster in the team, when you know you have your captain, your team, your coaching staff, everyone trusts in you - what else can you ask for? It's only going up from there."

This is the era of variations, as many of them as possible, to be successful in the shortest format of the game. As far as Prasidh is concerned, though, it's more important to stick to the plans. "Consistency is the best weapon any bowler can add to his armoury," he said. "That's one thing I have really worked on with Omkar Salvi (bowling coach), Abhishek Nayar (mentor), and all of them. Apart from that, I do work on the variations, I do bowl the slower one, the yorker, be it whatever it is. But it's been more towards the consistency side, whatever I have been doing."

"Any wrong ball, you're going to go for a six. So that does really help us when we're bowling against someone else" PRASIDH KRISHNA ON BOWLING TO ANDRE RUSSELL IN THE NETS

A bit of speed might be the next thing on the agenda: "A yorker at 130 and a yorker at 140-145 are two completely different parameters. So yeah, I would like to get speed as an aspect because that is something not everyone can do. So when I'm able to do it, I want to do it consistently."

In the Super Over against Delhi Capitals, Prasidh bowled two balls to Iyer and four to Rishabh Pant. Tough opponents of course - "I tried to keep it away from their hitting zone" - but it doesn't compare to the sort of fearinstills; Prasidh hasn't had a chance to bowl much to Russell in the nets, but has got a taste of the Dre Russ treatment.

"As bowlers in KKR, when we are bowling to him, we know we are bowling to the best batsman in the world when it comes to T20, at least in the hitting ability that he has. To be able to bowl to him every day, you still have to learn for yourself," Prasidh said. "Any wrong ball, you're going to go for a six. So that does really help us when we're bowling against someone else.

"In one of the practice games I played, I did get hit for a couple of sixes. Other than that, I don't really get to bowl much to him in the nets, because it's usually him hitting it out of the park and I do the initial part of the nets and then he usually bats at the last. So by then I am almost done bowling. It's been challenging."

Shadab Khan ruled out of England series with virus

Every Mitchell Starc Wicket at the 2019 ICC Cricket World...

Every Mitchell Starc Wicket at the 2019 ICC Cricket World Cup

After Angola secured their place on Friday, and Burundi, Cameroon, Guinea-Bissau...

Cricket Australia chairman Earl Eddings has been commissioned to lead another review...

'Don't want to think about it' - Mashrafe shrugs off retirement...

The banned Pakistan batsman pleaded not guilty after being charged by the UK's National...