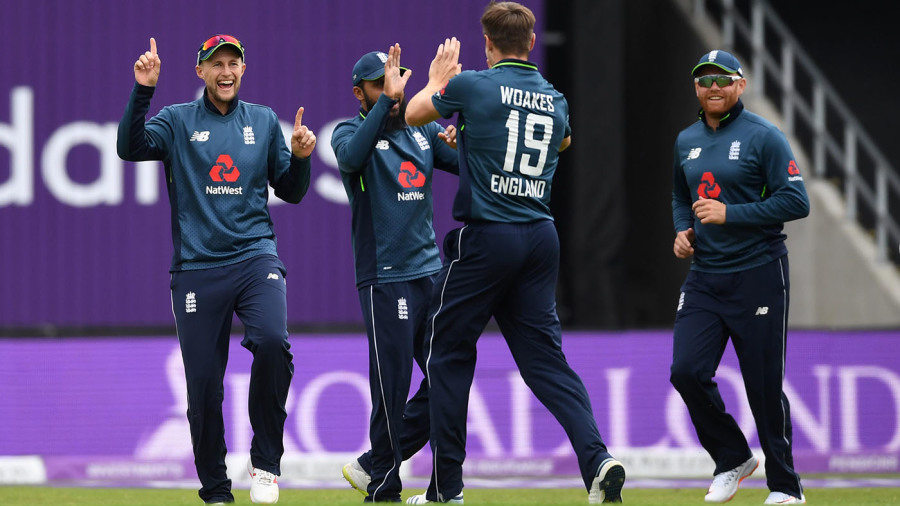 Any more for any more? As has become customary on the pristine one-day pitches of England - not so green and really quite unpleasant for bowlers - these two teams have served up an uninterrupted sequence of free-scoring frolics. This is currently the (minimum of three matches) and we can probably expect more of the same in the finale as both England and Pakistan conclude their World Cup preparations.

The result is already a foregone conclusion, with England 3-0 up and extending an unbeaten run at home that stretches back to 2015 - or the year dot, as far as Eoin Morgan and his World Cup hopefuls are concerned. Everything else was pre-history, which is fitting given how often England have rewritten the record books since.

Victory in Nottingham on Friday was not quite so straightforward, however, and but for a more clinical Pakistan fielding effort the series might still be alive. England have developed a but they threatened to malfunction after had lit the path with a blazing hundred at Trent Bridge. Despite a collapse, England were able to regroup around and launch a late sortie on the target as Pakistan's nerve failed them.

Winning when the going gets tough is a mark of an accomplished side, and doing so in the absence of captain Eoin Morgan and regular opener Jonny Bairstow - suspended and rested respectively - suggests a strong competitive spirit within the team. Jos Buttler, standing in for Morgan, said afterwards that it was a performance that boded well ahead of entering the pressurised environment of tournament play.

Having seen his side rack up a third consecutive score in the region of 350 only to lose, Pakistan captain Sarfaraz Ahmed gave an obligatory nod to the positives in the form of 's immaculate hundred and a solid return to active service for veteran pair and . Perhaps, too, he can console himself that very few teams at the World Cup will be able to reel in such big targets in the manner of England. But with questions still surrounding the exact make-up of Pakistan's final 15, for a couple of players this could be the last chance to leave a positive impression.

Few of England's players know as much about fulfilling great expectations as . The one concession to reliability over rock'n'roll in England's batting order, Root pootles along at No.3 averaging 50 and scoring a century roughly every nine innings. A run of white-ball scores against Ireland and Pakistan comprising 7, 47, 40, 43, and 36 will be of concern to no one within the England set-up but the man himself would surely love to crack on for the big innings that takes him into the World Cup with a bounce.

After a tough audition process, Pakistan's pace bowlers may all be feeling a little nervy in the face of the World Cup guillotine. gave glimpses of his potential in an otherwise expensive outing at Trent Bridge, while , , and have managed six wickets between them, with economy rates between 7.01 and 8.15. With Mohammad Amir unscathed thanks to his bout of chicken pox - though currently outside the preliminary squad looking in - and only one match to go, natural selection may be about to take its course.

Trevor Bayliss has said England will play their strongest team, which would mean Bairstow and Morgan returning, although the bowlers' workloads will be monitored. Tom Curran's performance with bat and ball could encourage further rest for Chris Woakes, while Jofra Archer and Mark Wood will hope to continue in their newly minted 90mph new-ball partnership. Roy's young daughter is improving after being but the opener is unlikely to play* meaning another opportunity for James Vince.

Imam-ul-Haq was forced off the field after being hit on the elbow at Trent Bridge, although he did come back to bat at the end of Pakistan's innings. Sarfaraz described the injury as a \"bit of a bruise\", although back-up opener Abid Ali is waiting for some game time if there are any concerns about Imam. Amir's status after illness is less clear, and he could perhaps be forgiven for wanting to stay out of the firing line.

Headingley generally loses some of its capricious edge for white-ball games, although India's powerful line-up struggled to 256 for 8 there last year only for England to knock them off two down. In this season's Royal London Cup, it is behind only Trent Bridge as the fastest-scoring ground, with runs coming at 6.81 an over. The forecast is for a cloudy day with minimal chance of rain and mild temperatures.

\"You've got to find a way to win and we're going to have situations where we play poorly during a phase of the game. We've managed to come out the other end of that and win.\"
\nJos Buttler on England's test at Trent Bridge

\"The way we've fielded here in three matches is not up to the mark. We have to improve.\"
\nSarfaraz Ahmed laments another sloppy performance

Richardson, Starc and Abbott blow Pakistan away on rapid...

The last two Tests have earned the MCG pitch ratings of 'average' and 'poor', and...

The banned Pakistan batsman pleaded not guilty after being charged by the UK's National...

The former Australia captain retires from his role as CA's national talent manager...