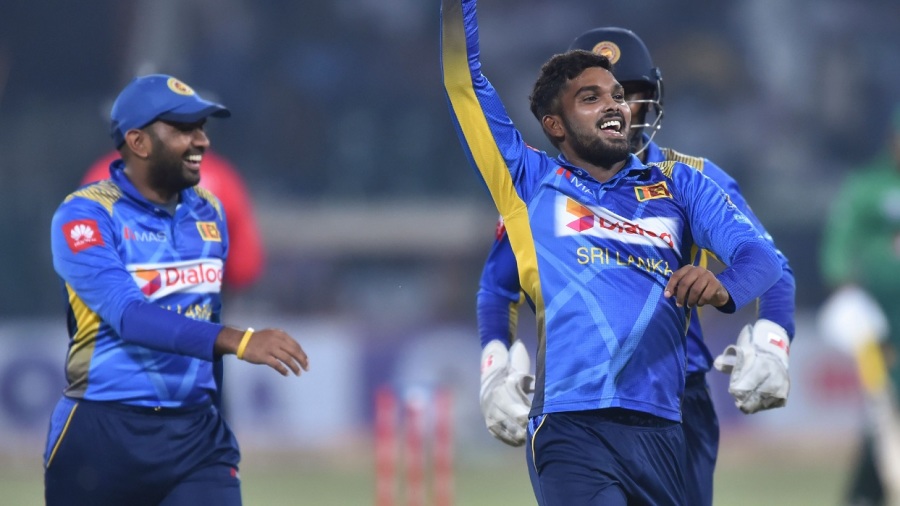 's rousing 77 off 48 balls and more finishing fireworks from propelled Sri Lanka to 182 for 6, before the bowlers hurt Pakistan in the Powerplay again and then brought down the middle order once the field had spread.

Sri Lanka are not only inexperienced on account of the many withdrawals from this tour, they also have such a poor recent T20I record that they have to go through the qualifiers next year in order to play in the T20 World Cup. And yet, they have now comfortably won a series against the top-ranked T20I side in the world. The margin on this occasion was 35 runs - Pakistan were dismissed by the end of the 19th over.

While Rajapaksa had headlined the batting - a 94-run third-wicket stand with Shehan Jayasuriya forming the spine of the innings - Nuwan Pradeep took 4 for 25, first derailing an then wiping out the chase. The most dramatic over of the game was delivered by , however, who was hit for six by Ahmed Shehzad and would then take three wickets off the next four balls, including that of Sarfaraz Ahmed, who was batting well until that point.

Imad Wasim struck 47 off 29 balls, and put on 75 in the company of Asif Ali, but with the pair having come together with Pakistan at 52 for 5 after eight overs, their efforts always seemed doomed. In the end, the last five wickets fell in the space of 19 balls.

In the previous match, it had taken Rajapaksa a few overs to find his timing, but here he was flying almost from the outset, tickling Wahab Riaz down the leg side for a four in the fourth over, before carving a 149kph Wahab delivery over cover in that same over. He would hit two more sixes before the Powerplay was done - one towering slog-sweep off Imad, and an imperious straight hit off Mohammad Amir. It was thanks largely to him that Sri Lanka leapt to 52 for 2 by the end of the sixth over - Rajapaksa having hit 24 off 11 with the field up.

He was measured for a few overs after that, but cut loose again in the 11th over, launching Shadab Khan for successive leg-side sixes, before reaching his half-century off the 31st ball he faced. The most audacious shots of the evening came against Mohammad Hasnain, who was regularly breaching 140kph. Again off successive balls, Rajapaksa made room in the 14th over, and thumped the fast bowler over the off side - the first of those two sixes sailing over deep extra-cover, the second going a little squarer.

When he eventually holed out against Shadab, Rajapaksa had six sixes and four fours to his name. He had also made a strong case for inclusion in the XI even when all the regular players are available.

In fact, this outfit has done so well in Pakistan, it's difficult to tell which one the first-choice T20I side is. As had been the case on Saturday, several players made strong contributions towards the victory. Before Shanaka clubbed 27 off 15 to finish the innings, Jayasuriya had made 34 off 28. With the ball, Kasun Rajitha's tight first spell, in which he claimed the wicket of Fakhar Zaman and conceded only five runs, was vital to keeping Pakistan quiet through the Powerplay.

Too many Pakistan players were off their game. Amir went at ten runs an over, while Hasnain and Shadab were almost as expensive, thanks in part to the Rajapaksa sixes. Umar Akmal then collected his second golden duck in a row, getting out lbw in that manic Hasaranga over, immediately after Shehzad had been bowled by a googly. Babar Azam would often be leading Pakistan in tough chases, but even he has picked up two poor scores so far in the series.

'Would personally hate to give them two points' - Tendulkar

Kevin Anderson recalls when he lost to Rafael Nadal as...

In an interview following his third round win at the Miami Open, Kevin Anderson...