How Rashid Khan and Haris Rauf got their hat-tricks 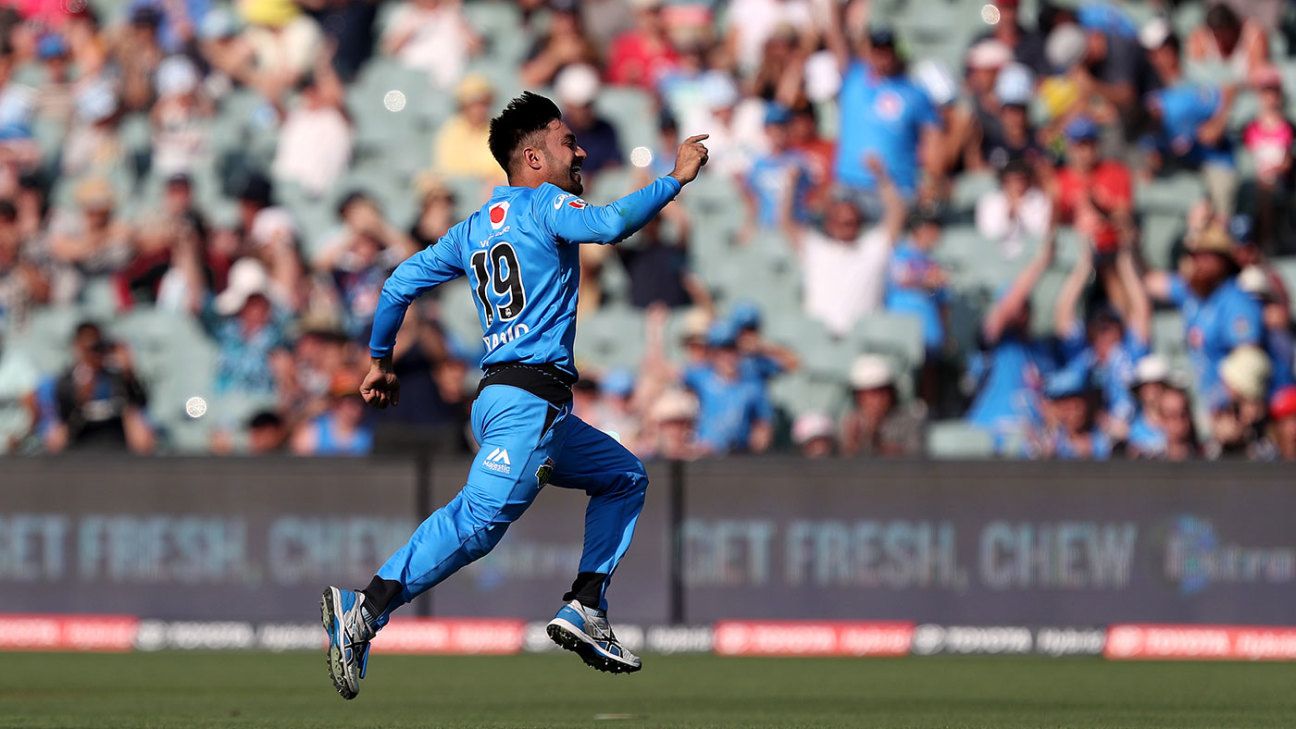 and turned it on in the new year playing for Adelaide Strikers and Melbourne Stars. First, the Afghanistan legspinner nearly turned the game, turning a simple Sydney Sixers chase into a very nervy finish

Rashid Khan's got a hat-trick on Josh Hazlewood's birthday!

10.5 Rashid Khan to Vince, OUT, that's what Strikers needed! Length ball outside off, and a bit of turn away from Vince. He looks to defend, but it takes a big nick into the keeper's gloves

10.6 Rashid Khan to Edwards, OUT, two in two! First-ball duck. Good length on off, but the googly spins inwards. Edwards is caught on the wrong line, and the ball hits him in front of leg stump. Rashid's massive appeal may have convinced the umpire, because that was sliding down leg for certain

12.1 Rashid Khan to Silk, OUT, he's got a hat-trick! Full on off, and the googly turns through Silk's defense, and clips middle stump. The Strikers are now roaring! The BBL's fifth hat-trick

Then, barely an hour later, the Pakistan fast bowler took centre stage at the MCG, going bang, bang and bang against Sydney Thunder.

19.2 Haris Rauf to Gilkes, OUT, another slower ball on the legs, skies this flick aiming for midwicket but it sails toward Lamichhane at deep fine leg. He comes in off the rope 15 yards and judges it fairly well, lunging forward at the end to claim this. Give an assist to Zampa for cutting the previous ball to a single to put Gilkes on strike.

19.3 Haris Rauf to Ferguson, OUT, on a hat-trick! Another cutter at 125 kph on a fullish length. Ferguson hasn't looked comfortable since being struck on the toe in Rauf's previous over. Ferguson shuffles well across his stumps mistimes this off his thigh and ricochets into the stumps.

19.4 Haris Rauf to Sams, OUT, a doubleheader double hat-trick! Good length ball skids on to beat Sams' flick across and pinned lbw in front of middle. Replays indicate Sams was struck high on the back leg in front of middle and leg with the ball tailing in. Very favorable decision on height and line but he's bowled very well today.

PCB proposes to host Bangladesh for two Tests in January, BCB to reply on Thursday

Alex Hales, Chris Jordan return to PSL for play-offs after...

"You have to give a guy a chance to play a couple of games and then if he hasn't...

Jambo Bukoba and football team up for Tanzanian youngsters

Roger Federer: 'Rafael Nadal always had the answers on...

Australia have named an unchanged squad for the T20I series against Sri Lanka but...

Tennis - The Swiss will chase the seventh crown at the Australian Open, hoping to...

'Said one thing, did another' - Mickey Arthur on people...

Former coach says he recommended Akram and Misbah for cricket committee, which made...

Tennis - Ashleigh defeated Dayana Yastremska for her first title on the home soil...