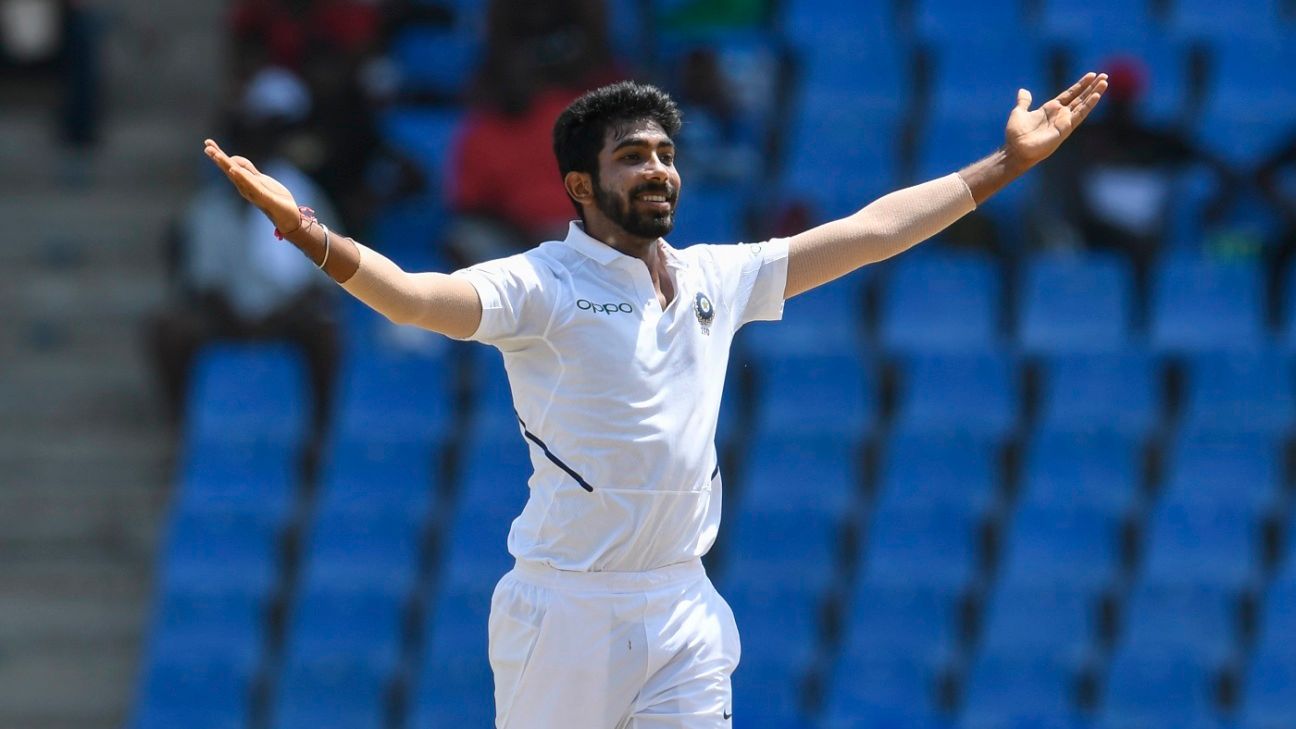 's 5 for 7 - the least expensive five-wicket haul by an Indian in Tests - helped hurry India towards a record 318-run win over West Indies in Antigua. That five-for also helped Bumrah become the first bowler from Asia to take five-wicket hauls in South Africa, England, Australia and West Indies. And beyond the numbers, he impressed two Antiguan fast-bowling greats - and - with his clarity of thought, game sense and aggression.

So impressed was Roberts that, in an interview with the Indian Express, he called Bumrah the "best Indian fast bowler I have seen".

"In my time, it was all spin," he said, thinking back to the India attacks of the past. "Good ones, but they wouldn't win you matches overseas. India had Kapil Dev and some others, but we never thought they could produce someone as lethal as Bumrah. He's the best Indian fast bowler I have seen."

Roberts, part of the great pace quartets that also included Michael Holding, Joel Garner, Colin Croft and Malcolm Marshall, described how Bumrah's unorthodox run-up and action broke the mental rhythm of batsmen as they prepared to face him. But what made the India bowler truly special, he felt, was his game sense and thinking, which belie the fact that he only made his Test debut in January 2018, and has only played only 11 games in the format.

"When a bowler is running in, you should look at the batsmen. They are settling into a mental rhythm of their own in their mind," Roberts said. "They are visualising the bowler, his action, the leap, the load-up, the release and things like that. Their thought processes are conditioned in such a way that if he's a side-on bowler, the ball will come like that, if it's high-arm it would come in a different way. Or the longer the run-up, the quicker the ball will be. With Bumrah, the batsmen have little time to get into their mental rhythm.

"Look at everything else he does, he's classical. He moves two balls into the batsmen, and the other one goes away. Then two away from him, and then one into him. This is how we did, this is how fast bowlers have operated over the years. But the best one knows how, where and when to bowl. And Bumrah seems to have this awareness, which usually takes a lot of time to develop, a lot of experience. But how old is he? How many Tests has he played? He's a quick learner, isn't he?

"To me, it has been the most striking feature of him. Some call it maturity. I call it game sense. There seems to be clarity in his thinking, and that automatically shows in his bowling. Some bowlers, very skillful ones, don't develop it even 10 years after they had played the game. That's the biggest thing for a fast bowler, to learn how to use your head."

Jasprit Bumrah is swarmed by his team-mates Getty Images

The game sense also impressed Ambrose, who said Bumrah's ability to size up and adjust his lengths according to surfaces and batsmen reminded him of his long-time new-ball partner Courtney Walsh.

"He's good at varying his lengths, depending on the surfaces and batsmen," Ambrose told the Indian Express. "I saw that in the World Cup, how he adjusted (and altered) his lengths according to the conditions and batsmen. That makes life difficult for batsmen.

"(In this regard), he reminds me a bit of Courtney (Walsh) a bit. He was wonderful in sizing up the length and bowling accordingly."

Ambrose also said Bumrah's quiet demeanour did not make him any less aggressive on the field.

Could Bumrah have fitted into the fearsome West Indies attacks of the past?

Roberts suggested Bumrah's unconventional action would have added a different dimension to the attacks he was part of.

"It's the strangest action that I have seen on a cricket field," he said. "I need to study that for a longer time to understand the mechanics of his action. But if he were born here back in our days, we would have had him. A freak was the only element missing in our bowling line-up. In fact, Bumrah is the only variety of bowler we had never produced. Then I don't think even India would produce one like him again."

Ambrose went even further in his praise.

"At times, he rekindles memories of our prime," he said. "The pace, aggression, the hostility, the craft. The way he outclasses the batsmen, the way he out-thinks them. He could have been one of us, he's so complete a bowler that he could have played in any era."

2015 drawn Test against Pakistan was the best of my career:...

Tennis: Zverev wasnand#039;t feeling at his best but he still managed to overcome...

'Dhoni's experience has come good eight out of ten times'...