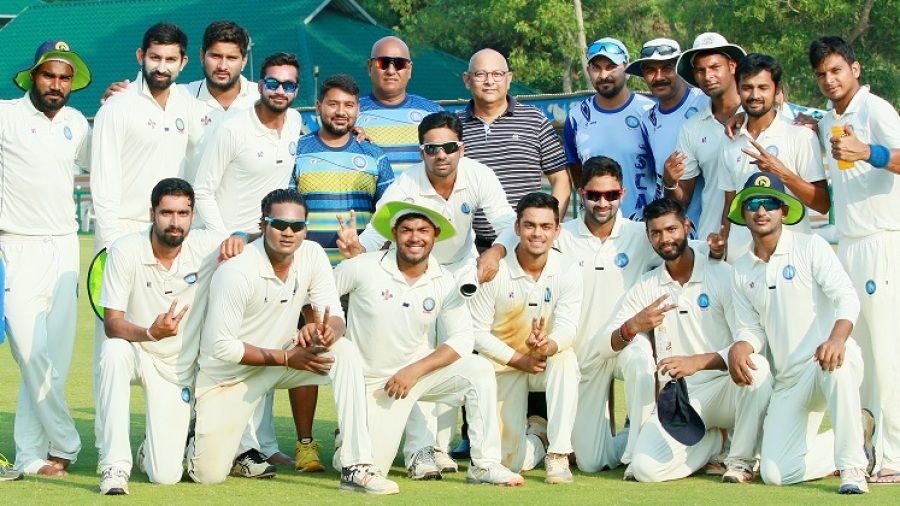 Jharkhand snatched victory over Gujarat in a in the opening game of the Super League phase of the Syed Mushtaq Ali Trophy in Indore.

Needing six off the final two deliveries, dispatched the first for four to leave Gujarat needing two off the last delivery. However, Gandhi failed to connect as Gujarat faltered in heart-breaking fashion.

Put in to bat in a truncated 18-overs-a-side contest because of a wet outfield, Jharkhand overcame a middle-order collapse to post 148 for 7. Ishan Kishan, the captain and wicketkeeper, put together 82 in just 7.2 overs with , who made 45, before they lost five wickets for just 37 runs off the next 41 balls. It needed an unbeaten 20-ball 22 from Kumar Deobrat to provide a late lift.

Gujarat slumped to 9 for 2 in the second over, but found an enforcer in Karan Patel, who made a 26-ball 35, and Axar Patel, with 28 courtesy three fours and a six, kept them in the hunt before a breakdown that eventually proved costly. Anand also chipped in with the ball, taking 2 for 26 to walk away with the Man of the Match award.

'We went out to contain in the second session' - Naseem...

Horacio Zeballos: I am as happy as when I beat Rafael Nadal...

Horacio Zeballos experienced one of the most important moments in his career having...

In an interview to Tennis Magazin in Hamburg in July, Dominic Thiem opened up for...

Legends give Lebanese students an experience of a lifetime

Federer: 'I still remember some of my biggest points. Like...

Roger Federer was asked what are the most significant key points he has ever played...