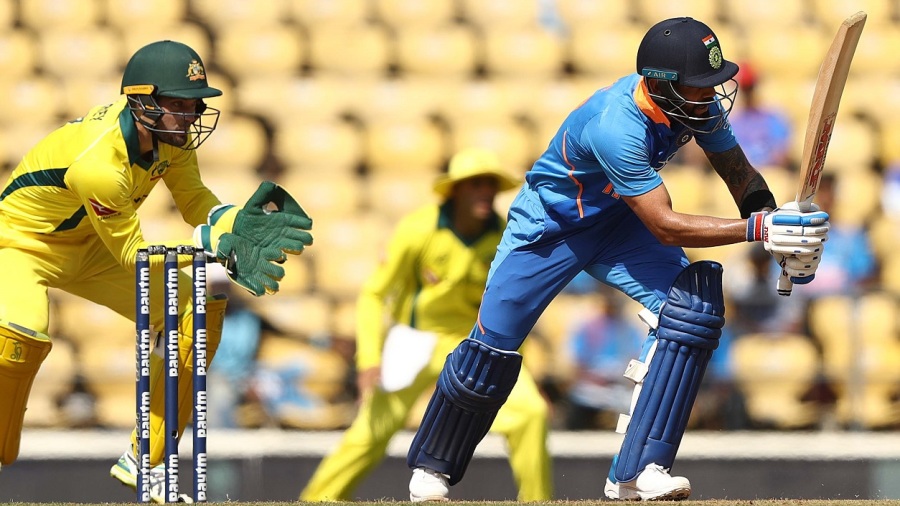 's 40th ODI century and a collective failure of Australian nerve saw India take a stranglehold of the ODI series in Nagpur, after the visitors found a way to lose despite needing only 33 from 34 balls with five wickets in hand at one point.

On a dry, slow Nagpur pitch that had always seemed likely to aid the team bowling second, the Australians wrestled gamely with India for most of the match in the face of Kohli's brilliance and the wiles of and.

However, the team led by Aaron Finch and coached by Justin Langer will spend considerable time pondering how they came to lose a match where they appeared to be in full control when Marcus Stoinis and Alex Carey were together. Even the wicket of Carey drew only muted celebration by India, but it heralded the loss of 5 for 24 in 30 balls to hand India a 2-0 series lead.

Bumrah was once again supreme, critically claiming two wickets for just one run in the 46th over of the innings and then cornering Stoinis into playing out another over worth one in the 48th, while Kuldeep's three wickets counterbalanced greater expense than usual. They set things up for to take the final two wickets while defending 11 off the last over.

India had lost Rohit Sharma in the first over and regular wickets for much of their innings, but Kohli found enough support from the likes of Vijay and Ravindra Jadeja to take his side to a defendable tally in hot weather.

Occupying 120 balls, Kohli's 116 took him into equal second place with Rohit Sharma behind Sachin Tendulkar's nine for the most 50-over centuries against Australia with seven apiece. Pat Cummins was Australia's outstanding bowler with four wickets and considerable economy, while Nathan Lyon was also more than useful on his recall to the team.

Adam Zampa claimed two wickets in as many balls including MS Dhoni for a golden duck, but he was otherwise expensive, as was Nathan Coulter-Nile. Glenn Maxwell's part-time off-breaks were more parsimonious than either.

Facing enormous pressure following an extended run of low scores, Finch was at least able to give his side a start to their chase in the company of Khawaja as the pair added a smooth 83 in 14.3 overs before being separated when the captain kneeled to sweep and was given out lbw.

When Khawaja followed shortly after by chipping tamely to cover, the innings appeared likely to lose momentum, but Shaun Marsh and Handscomb were able to rotate the strike effectively in a stand more useful than its mere numbers - 39 in 50 balls - suggested. Maxwell lasted only briefly before his pull shot was tunnelled under by Kuldeep, but Handscomb formed another effective stand with Stoinis, to take the game deep.

On the cusp of a half-century, Handscomb gambled on Jadeja's precision left-arm and paid for it with a direct hit, before Stoinis found another ally in Alex Carey. Together they ransacked 15 from Kuldeep's penultimate over to bring the target down into the run-a-ball region, only for the wrist spinner to respond in his final over by coaxing Carey to drag a sweep shot onto the stumps.

Coulter-Nile lasted only an energetic four balls before trying to cut Bumrah off the stumps, leaving 28 required from as many deliveries, and when Cummins touched Bumrah behind two balls later the game tilted firmly towards India.

Stoinis was still in occupation and raised only the second half-century of the match as the equation tightened further. But his determination not to expose Lyon allowed the requirement to blow out to 20 off 12, and 11 off the final over. In the hands of Vijay, his first ball was stump to stump, and Stoinis' big swing and miss brought an lbw decision. Zampa was bowled two balls later to give Vijay's bowling a boost and Australia plenty more to think about.

Concerns about defending a target among the visitors appeared to have overruled the state of the Nagpur pitch, which looked dry, cracked, and likely to take increasing amounts of spin as the game went on. Oddly given Finch's decision to bowl at the toss, the Australians chose two spinners for an exceedingly rare occasion in 50-over matches, with Lyon and the fit-again Marsh returning in place of Jason Behrendorff and Ashton Turner. India were unchanged.

Behrendorff's omission meant a rare outing with the new ball for Cummins, and he was to strike in the first over of the game. First beating Rohit Sharma with a full away swinger, he then dropped short and coaxed an upper cut that sailed unerringly into the hands of third man.

Kohli and Shikhar Dhawan seemed to have shrugged off this early reverse in some style, but the introduction of spin brought another change. Glenn Maxwell straightened a quicker offbreak enough from around the wicket to win an lbw verdict against Dhawan via the DRS, after the bowler insisted \"that's out\" to his captain Finch.

Ambati Rayudu was likewise deceived and dismissed lbw after forming the beginnings of a partnership with Kohli, this time given out on the field and seeing the decision upheld after his own review. Kohli, meanwhile, pushed through with typically well-chosen strokes, alert running between the wickets and deft placement for the occasional boundary in Nagpur's considerable heat.

A more lasting union grew between Kohli and Vijay, the pair managing to avoid falling prey to the slowness and turn of the pitch while also lifting India's run rate. Kohli and Vijay appeared to be in so much control that the latter's exit, a run-out backing up when the captain's drive was deflected onto the stumps by Zampa, was a genuine surprise in both its eventuality and its manner.

Zampa took advantage of the breathing room by coaxing Kedhar Jadhav to loft a catch to cover, and the very next ball the previously impassable MS Dhoni cuffed straight to Usman Khawaja at slip. Jadeja averted the hat-trick, and stayed with Kohli as he went to make his 40th ODI century, making him the only man other than Tendulkar to get this far. India's acceleration was measured rather than absolute, again underlining the difficulties of the pitch.

Kohli looked quite drained by the experience of fighting his way to three figures in such conditions, suggesting that it would be a difficult chase for an Australian side without anything like the same confidence as India's leader. A further indicator of the same was offered by how the Indian innings folded after Kohli's exit, the final three wickets claimed for two runs.

Bangladesh seek to break out of rut against Zimbabwe

With the series decided, Headingley offers a final chance for those on the brink...

In an interview to Radio Marca, Toni Nadal commented on his nephew Rafaeland#039;s...

Absence from Johannesburg Test is an overdue rest for strike bowler, says director...

Cerundolo, 21, set to debut in Cordoba next week.

Pakistan women target growth and maybe an upset at World...

Rafael Nadal does not give you a point, says Bellucci

In an interview to Punto de Break, Thomaz Bellucci recalled when he faced Rafael...

In their second career meeting, Vekic scored her first win over the five-time Grand...