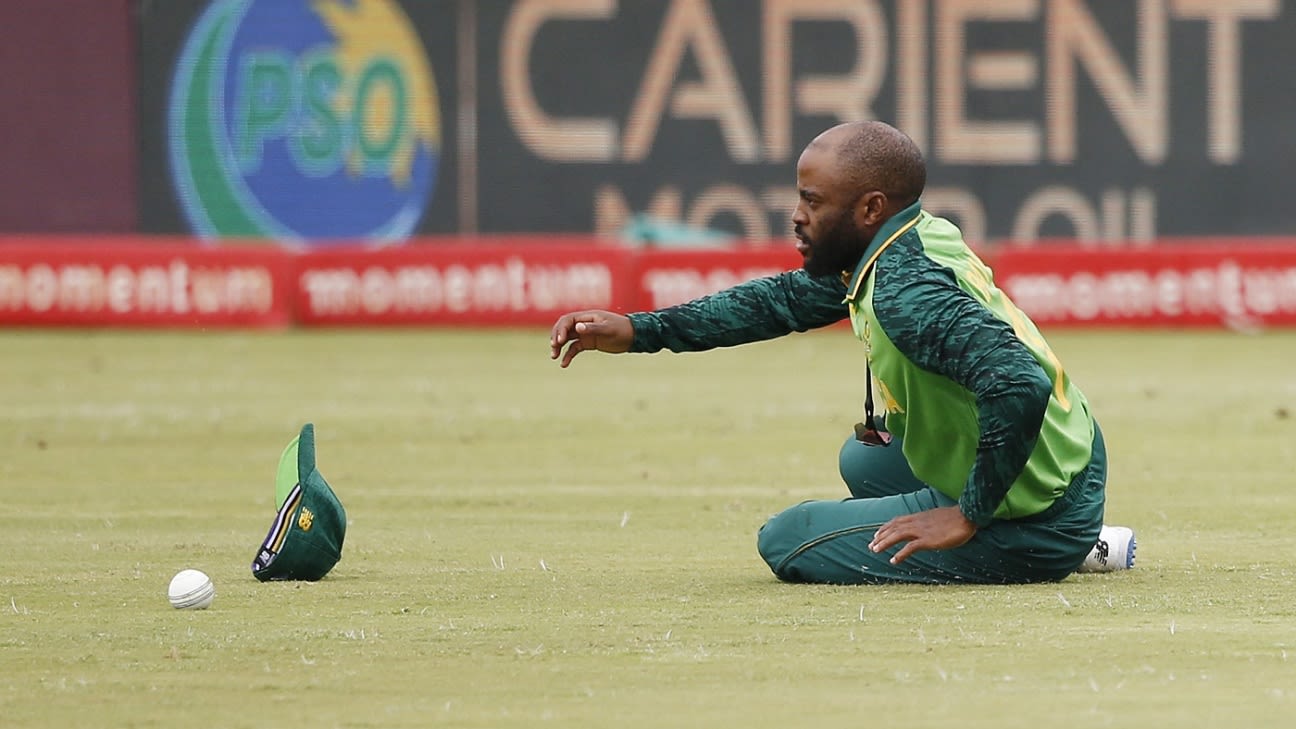 If thought the scant trophy cabinet that has so far characterised his tenure - two outright wins and a shared cup in nine series - was his biggest issue as this summer ends, he's wrong. It's the mounting list of unavailable players which is set to grow by one ahead of the T20I series against Pakistan.

New captain 's prospects of leading in his first T20I series are "not good" after he injured his hamstring while batting in the third ODI. Bavuma was in too much pain to navigate the staircase at SuperSport Park for post-match interviews, so Boucher stood in for him.

"Temba is a tough guy so when you see him hobbling around and it's only got worse in the change room, the way he is walking, I think he might have done something fairly bad," Boucher said. "He seems to be in pain. It doesn't look good which doesn't put us in a good position."

Bavuma showed signs of discomfort at the start of the 22nd over, when he had faced 18 balls. He required on-field treatment and appeared to be offered the choice to retire, but chose to continue. He ran awkwardly and only faced another five deliveries before being bowled, leaving an inexperienced middle and lower order to attempt to pull off the highest successful chase in Centurion.

South Africa were also without Rassie van der Dussen, who suffered a quad injury, and seems certain to miss out on the T20Is.

"Rassie is probably out for 10 days from yesterday. I'd be stupid to push him to try and play in these T20s. He is still staying in the squad and hope he can have a quick turnaround but it doesn't look likely that he is going to get on the park," Boucher said.

That means a South African team that were already five down - Quinton de Kock, David Miller, Kagiso Rabada, Anrich Nortje and Lungi Ngidi have all left for the IPL - could go into the four-match T20I series without seven first-choice players including the captain, with Heinrich Klaasen most likely to take over.

While some will question the decision for CSA to have entered into an agreement with the BCCI to release players for the IPL and others will ask about the timing of this series, Boucher refused to use that as an excuse for South Africa's series defeat.

"We knew that the IPL guys were leaving and we made arrangements for that," he said. "And the guys who came in knew they would be playing the last game and they prepared for that."

For some of them, that was evident. Janneman Malan and Kyle Verreynne scored half-centuries and Keshav Maharaj took 3 for 54 but South Africa lacked Nortje's killer instinct, Ngidi's ability at the death and a left-hander in the top six. "With a short boundary and having a left-hand, right-hand combination puts a bowling side under pressure so not having a left-hander in the top six is something we need to look at," Boucher said.

"There are some guys who would like to represent their country and see what international cricket is all about. We want to start winning series, especially at home"

Similarly, South Africa will aim to address their handling of key moments in close matches. "Where we are not having good pockets in the game, we are having really bad ones," Boucher said. "Today, in the last few overs, there were over 40 runs scored and in the first match, when we lost, we played 50% cricket and we still had a chance of winning the game."

South Africa conceded 56 runs in the last three overs in the final match and dropped a catch in the penultimate over of the first game. They also put down leading run-scorer Fakhar Zaman in the second match, and he went on to score 193, almost taking the game away from them. Boucher has identified fielding as a third area for South Africa to improve on. "We need to be more desperate in the field. Where usually we are very good, we are not that good at the moment."

That assessment could translate to a downcast camp, who are also confined to a bio-bubble, but Boucher indicated that the mood has not totally soured as South Africa approach their final opportunity to win silverware in the T20s, starting at the wicket.

"I don't think there is any negativity. The guys are desperate for opportunities," he said. "It's not ideal having injuries but with injuries, opportunities open. There are some guys who would like to represent their country and see what international cricket is all about. We want to start winning series, especially at home."

Fitness standards 'not where they needed to be' in UAE...

PCB urges people to not spread rumours amid coronavirus...