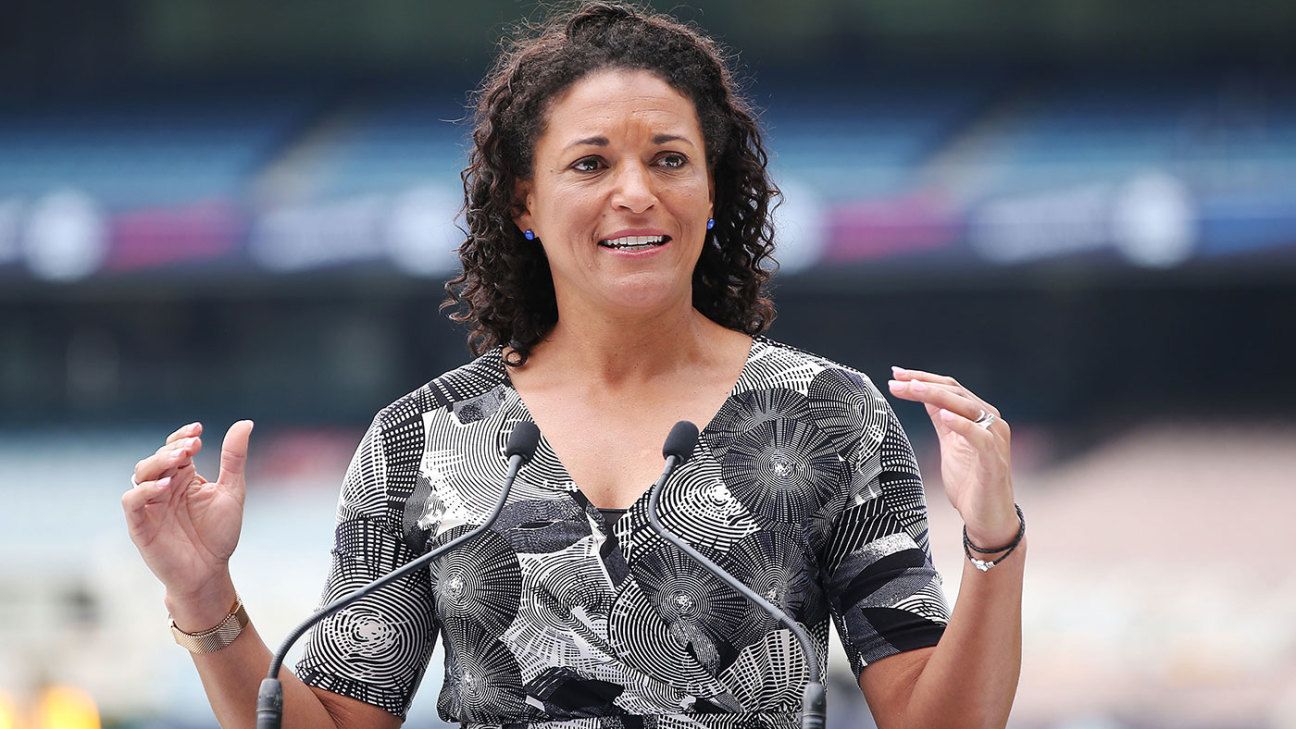 has been commissioned to walk the tightrope that ultimately proved too much for Mark Taylor, marrying broadcast commentary with a place on the Cricket Australia board as Cricket Victoria's nominee for a director. It's the first instance of a woman being appointed via one of the state associations.

Joining Jacqui Hey and Michelle Tredenick as female CA directors, Jones will add a wealth of playing experience for Australia, Victoria, Tasmania and Surrey to the board, while also bringing further media savvy in addition to the guidance now provided by the former Foxtel chief executive Richard Freudenstein, who replaced Taylor as the Cricket NSW nominee earlier this year.

Having played five Tests and 61 ODIs for Australia between 1997 and 2005, Jones went on to work in player management with TLA - a key partner of CA - before switching full-time to commentary in 2016, where she has worked with Nine, the ABC and on broadcasts for ICC events plus the IPL, PSL and CPL T20 tournaments. Last year Jones signed on with Fox Cricket as the subscription network became the major partner in CA's six-year, A$1.2 billion broadcast deal that also features the free-to-air Seven network.

When resigning from the board last year, amid the fallout from a cultural review into CA that led to the removal of the previous chairman David Peever, Taylor explained how difficult it was to work as both a commentator and a CA director, though he was able to hold the post from 2004 to 2018, with a brief break in 2012-13. for Taylor when Nine lost the cricket rights to Fox and Seven, while he remained a pundit for his employer.

"I sit in sometimes an interesting position as a former player, board director and also a broadcaster," Taylor said. "It can be a very tricky position, and often very hard to get the balance right between saying too much or saying not enough. Balancing those positions is tough, and it takes it out of you."

Earl Eddings, the CA chairman, said Jones' strong record as an advocate for women's sport, including terms as a board director of Bowls Australia from 2014 to 2017, as a member of the Victorian State Government Women in Sport and Recreation Taskforce in 2014 and 2015 and a former board member and now ambassador for Red Dust, an organisation promoting health in indigenous communities, gave her a range of experiences and skills that the CA board required.

"Mel has been an active and inspiring part of the cricket fabric for many years and we are privileged to have her join the board," Eddings said. "Australian Cricket has been undergoing significant change over the past two years and I've no doubt Mel's experience on and off the field will be an asset to the team as we move into our next phase.

"Mel's commitment to the game and her advocacy, particularly for women in sport, will only bolster our continued focus on advancing cricket to be the number one sport for women and girls. Her understanding of the pressures and privilege of play, in addition to the challenges and opportunities of administration are a welcome complement to an already-strong team. A trailblazer in cricket, it is only fitting that Mel is also the first female elected to the CA board as a state nominee."

Jones, who spent her first five years out of the international game as pathways, schools and female cricket development manager at Cricket Victoria, is also a qualified secondary school teacher, adding further to her potential insights for CA.

"I'm excited to have this opportunity to work with the board to strengthen cricket's bond with the community and ensure a healthy and sustainable future for the next generations," Jones said. "I have much admiration for the work that has been undertaken over the past 18 months in particular, an incredibly challenging time for cricket, and testament to its place in the hearts of Australians."

Bowling teams out will be 'critical' at the World Cup -...

Batsman loses 20 percent of his match fee for disciplinary breach ahead of the fifth...

Cummins pleads to be able to carry on shining and swinging

Cummins pleads to be able to carry on shining and swinging

Alex De Minaur speaks about his admiration for Roger Federer

Nathan Lyon comes in from the ODI cold to press his World...

Spinner has been overlooked in one-day cricket, but is timing his run to the World...

Sussex allrounder staying in the moment after impressing in the Caribbean with consistent...