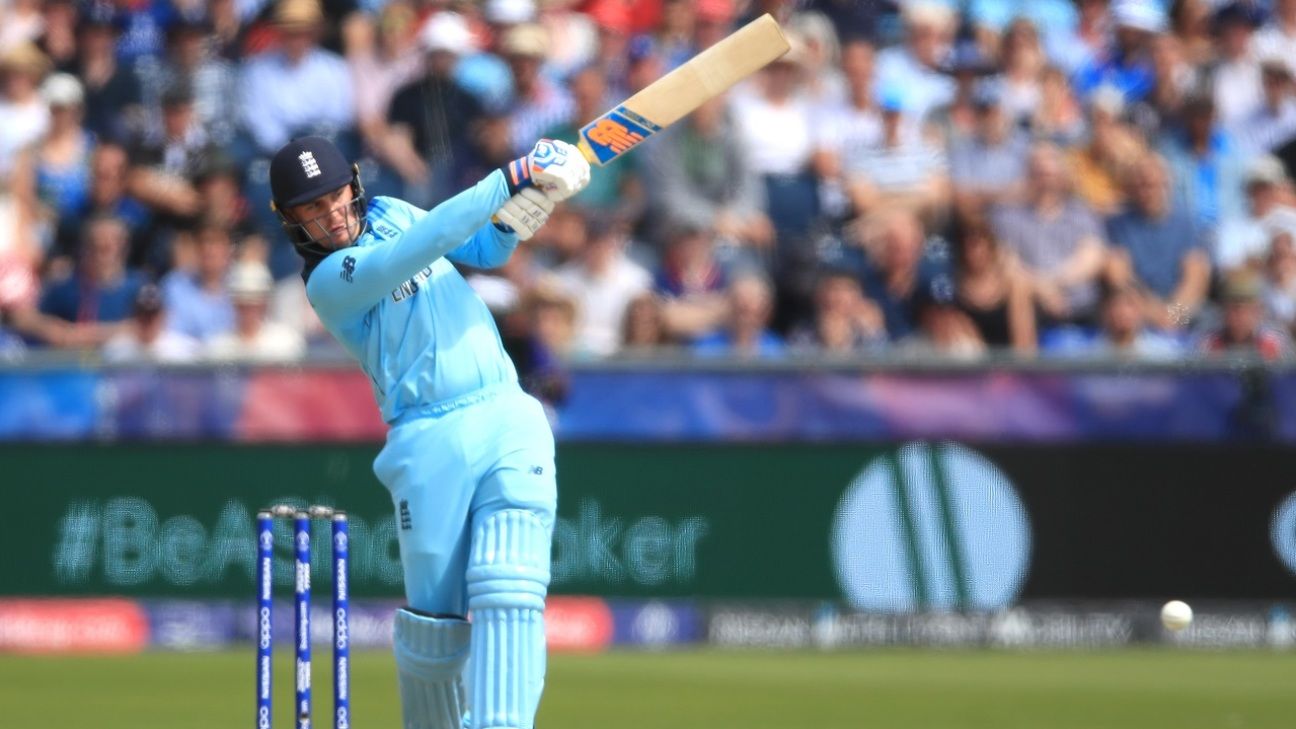 is no stranger to dealing with setbacks. He was out to the first ball of England's limited-overs revolution in 2015 and he was dropped ahead of their last visit to the semi-final stages of a global ODI tournament two years ago.

But even he was struggling to contain his frustration when he succumbed to a hamstring injury during the early stages of this World Cup. Having battled back from the disappointment of the Champions Trophy in 2017, having established himself as a key part of the side, and having skipped the IPL to ensure he was fit, he admits his latest injury setback was hard to deal with.

He also admits that, for a while after he was forced off the pitch during England's victory over West Indies, he feared his tournament was over.

"I'll be honest there was a bit of a fear I might be out," Roy says. "Initially we thought I'd be back for the Australia game, but then the scan came back and it was a little bit worse that we had thought, so I needed more time.

"There was a bit of a scare there. But I needed to stay positive around the group. I was staying around the lads and travelling with them so I had to keep giving out positive vibes and try to help where I can.

"But having been dropped in the Champions Trophy and then working my backside off to get here for the World Cup and being in good form only to then get injured, I was like 'give me a break!'

"I thought I was having no luck. It was frustrating and a bit hard to deal with."

While he remains some way off full fitness, Roy has been able to return to the side with some success. He made 66 and 60 in the two innings since his return - both victories for England - and is now facing the prospect of a World Cup semi-final saying he is "mentally and physically" in the right place.

Jason Roy got off to a flying start Getty Images

"I'm as close to 100 percent as I'm going to be," he says. "It was a decent injury, which was a shame, but I was overworking it a touch and these things happen. The doctors and physios have been incredible to get me to the stage I'm at now where I'm at match fitness and I'll be able to get through the next two games for sure. But I might not be back at point for a little bit; I'm quite enjoying being at mid-off.

"I'm right where I wanted to be, both mentally and physically. This is the reward for the hard work and sacrifices we all make. I didn't put myself in the IPL auction, I did everything I possibly could to get myself to this point I'm at now.

"I'm ecstatic with where I'm at with my cricket and it just goes to show that all the hard work and dedication that goes in really helps.

"It is nice to be in a completely different place to where I was in Cardiff [where he was dropped for the Champions Trophy semi-final], but to be honest I think I've been here for a while now, since I came back into the side. It has been a really positive journey for me since returning to the England team and it is great that it is still going strong into a World Cup semi-final."

It's hard to imagine Roy being dropped these days. But, back in 2017, he had failed to pass 20 in nine innings in a run that included six single-figure scores. He owed his return to the decision to omit Alex Hales following the incident in Bristol and performed so well in partnership with Jonny Bairstow, that England's new opening pair was established.

"Playing Test cricket and playing in the Ashes has been an ambition of mine for years. If the call comes, then great"

"There's no secret to it apart from the fact that we both work hard and love batting together," Roy says of their partnership. "We enjoy each other's company out in the middle and we just go to work really. There isn't much rocket science behind it. He's obviously a great player."

Roy struggled for runs when he first came into the ODI side. He failed to reach 40 in that first series against New Zealand and, after 13 innings, he was averaging a modest 27.69. But the team management had spotted some characteristics they liked, not least a commitment to the newly defined aggressive approach and a selflessness to the team cause. For those reasons, they stuck with him through that underwhelming start.

And, up to a point, that might be why they are likely to draft him into the Test side in the coming weeks. While there is an acceptance he has spent most of his first-class career in the middle-order - his county coach, Michael Di Venuto, recently expressed his reservations over the idea of him opening in Test cricket - it is increasingly apparent that he will be to bat in the top three, probably as an opener, during the Ashes.

"Yes, there has been a bit of chat about it," he says. "Playing Test cricket and playing in the Ashes has been an ambition of mine for years. It hasn't just come about in the last couple of months.

"If the call comes, then great it comes, but if it doesn't then so be it. Of course my ambition is to play Test cricket and see how I go.

"When you're young you don't understand a huge amount about batting, you just go out there and bat. But now I feel like I know myself a lot better as a batsman.

"Most of my batting in first-class cricket has been at No.4, No. 5 or No. 6, but I played at No. 3 twice last year so I'm happy wherever they want to put me. They can put me at No. 9 if they want, although I can't bowl a few overs! I think I'm better off at the top of the order and then I can give it a go from there.

"If I get the chance then I'd like to think I'll be able to cope, but I don't want to speak too soon because there is plenty that goes on. You get analysed a lot more in Test cricket. They are long days and the media have got to talk about something which will be interesting.

"I've played a lot of white-ball games for England so if I get a chance then that should hold me in good stead. Everyone knows what I'm about so if I get caught at fourth slip driving at a ball that maybe a 'traditional' Test cricketer wouldn't drive at, then people hopefully won't be too outraged by that."

He learned early that, for him at least, that absence of traditional thinking may be one of his greatest strengths. In his second ODI - against New Zealand - he had spent so long thinking about Trent Boult's skills that when a "juicy half-volley" greeted him, he wasn't expecting it and edged a drive to point.

"I over-analysed my first game by thinking about Trent Boult and how he hoops the ball in," he says. "I thought I had to watch that front pad.

"Instead he gave me a juicy half-volley that didn't swing at all and I wasn't expecting it. So since then I haven't over-analysed bowlers because on the day things can be different. I just play each ball as it comes.

"That day was a disaster for me. But now I've got a World Cup semi-final to look forward to. It's unbelievable."

Was frustrated on learning I had hepatitis - Shadab Khan

A goalkeeper's guide to warming up

To help goalkeepers around the world achieve what they are aiming for and stay healthy...

Two weeks ago, he failed to defend eight off the final over. On Thursday, he hit...

Pakistan's composure crumbles with victory in sight after brace of centuries on...

Barty praises Bianca Andreescu for US Open final win vs...