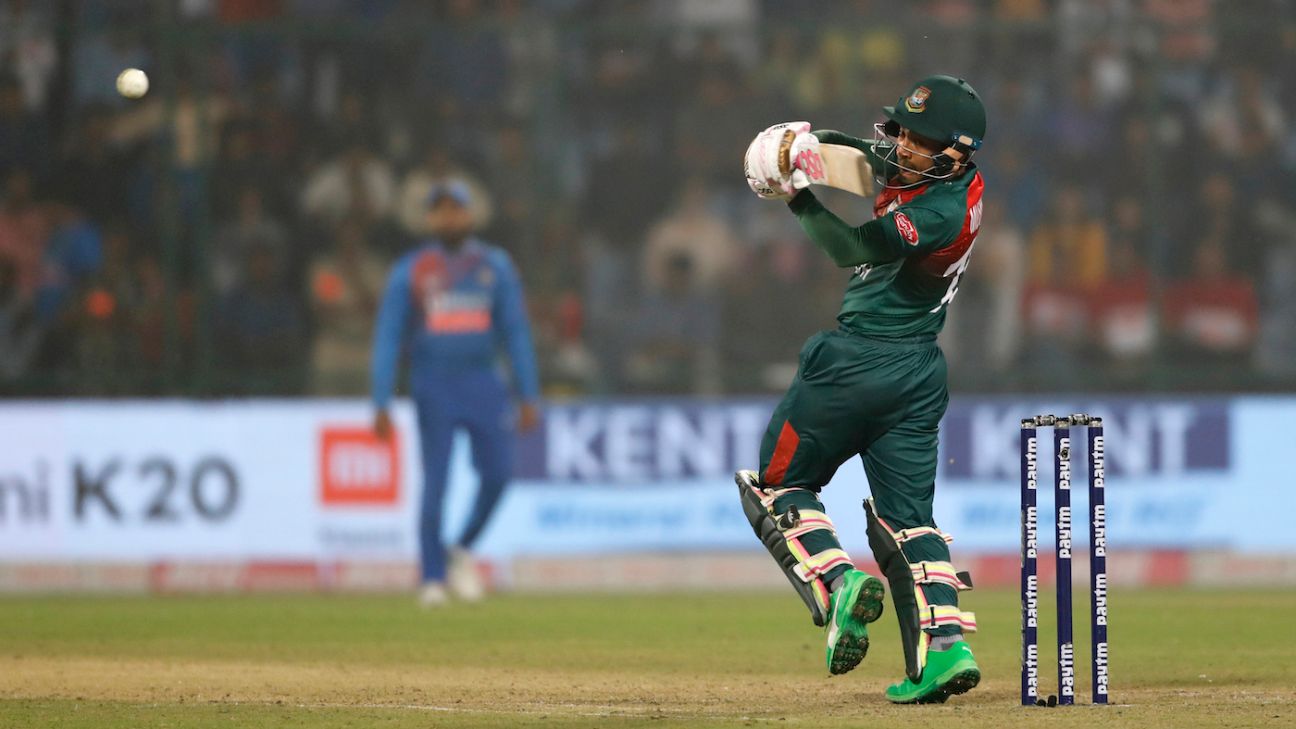 It was difficult to focus on it through the toxic haze, and even more difficult for those playing it - two players vomited during the game - but the Feroz Shah Kotla T20I was a great study in minute tactics and larger struggles of batsmen looking to find their touch, and the intersection of both. One captain known for his studied and deliberate decision-making went against a side known for emotionally charged cricket, and it made for a gripping finish.

, India's stand-in captain but a clinical leader of the Mumbai Indians, made a seemingly un-clinical move by leaving the young three overs to bowl in the last six. His third eventually went for 18, sealing Bangladesh's chase, relieving some of the nightmares might have had from the unfinished job in Bengaluru three years ago.

Players actually think less of those nightmares than we do. Not least because Mushfiqur knew he has finished many a game off for Bangladesh since then. It was more challenging from the point of view of where Mushfiqur stood and where his team stood. After all the drama of the last fortnight - "the toughest two weeks of my 15-year career" - Mushfiqur knew the only way back was winning matches.

In the way of that win were struggles on a slow pitch with turn on it and canny spinners exploiting it. Mushfiqur and Soumya Sarkar struggled to find any sort of fluency in their innings. After they had spent six overs together, ESPNcricinfo's Forecaster gave them a 65% chance of winning. It seemed optimistic: the ball was turning, and the two were going at around a run a ball despite having tried adventurous shots.

The T20 rule of thumb for these situations in chases is that you hit out only if the conditions are flat. Otherwise, if you are a seasoned batsman, if you are finding it difficult, chances are the next batsman will find it more difficult. So you back yourself. So Mushfiqur and Soumya decided to fight it out and take the game deep and wait for the seamers.

Unknown to themselves, the Bangladesh pair pushed the seamers back by simply not getting out, leaving, as a result, Khaleel with three overs at the end. Now Rohit might ask Jasprit Bumrah or Lasith Malinga to bowl three at the death, but he ideally doesn't want Khaleel in that position. However, he is calculating in his head that after Soumya, Mahmudullah will come out to bat, so he is waiting to see if he can re-introduce Khaleel to two right-hand batsmen instead of a left-hand batsman.

It is as much about protecting Khaleel's left-arm angle into the left-hand batsman as it is about exploiting the angle across the right-hand batsmen. Rohit would later say that the angle troubled them too. Rohit knows he can keep Yuzvendra Chahal back for one over but other spinners need to bowl out before the death. So that window to get that one Khaleel over out of the way is brief, a window that Mushfiqur and Soumya unwittingly shut by just looking to take the game deep.

Chahal goes for just one run in the tenth, Washington Sundar concedes just four in the 13th, the first six overs of the partnership bring just 40 runs, the asking rate keeps rising, but neither of them gives up the ghost.

"Only the batsmen in the middle know what's going on in the pitch," Mushfiqur said. "Not anyone in the dugout, not the next batsman. I told Soumya if one of us bats till the 19th over, we can still chase 25 because they will bowl seamers."

It is true India would bowl seamers in the last two, but to get three straight overs from Khaleel to be able to line him up is a bonus Bangladesh get without really working towards it. In ultimate irony, Khaleel gets the wicket of the left-hand batsman, a precondition, if fulfilled sooner, that might have given him an easier task at the death. Such events can make a captain look silly at times, but captaincy is not done in hindsight. Rohit had a sound cricketing reason for what he did.

And so begins the 19th over with all the similarities of that Bengaluru heartbreak coming to fore. A similar target, same opposition, the same two batsmen out in the middle. This time, though, they have Khaleel instead of Bumrah. The stakes might not be as high as in a virtual World Cup quarter-final, but losing will raise more questions about their finishing abilities against India. Losing will send them back to thinking about the events of the last two weeks.

Mushfiqur gets the better of Khaleel here, ruining his figures of three overs for 20 runs. Mushfiqur eventually ends with a strike rate of 140, Bangladesh have their first win in India after having let the Forecaster drop to 49%, but it is fascinating to imagine how the game plays out if Soumya falls to spin around the 11th over. Khaleel tries to sneak an over in, but surely Bangladesh don't sit back and let him bowl that over. Or perhaps, in a similar situation next time, Rohit - who usually has a proper sixth-bowling option at Mumbai Indians - tries to sneak one in from Shivam Dube.

There is relief too that the next such set piece will be played in much more breathable air.

Tom Moody on David Warner: 'He has come back with a lot...

We want to play our part in bringing cricket back to Pakistan...

Banini: We’re used to battling, it’s made us strong

Banini: We’re used to battling – it’s made us strong

Roger Federer: During US Open I decided that I would play...

Roger Federer spoke about his 2020 schedule and the reasons why he will play French...

World Cup still the focus for England and West Indies despite...

Andre Russell set to miss out with knee injury as England's fringe players are given...

The Atletico fan helping in the battle against cancer

The 40 African nations still in the hunt for a spot at the FIFA World Cup Qatar...

Tennis - Novak is spending the 275th week on the ATP throne but will lose it in...