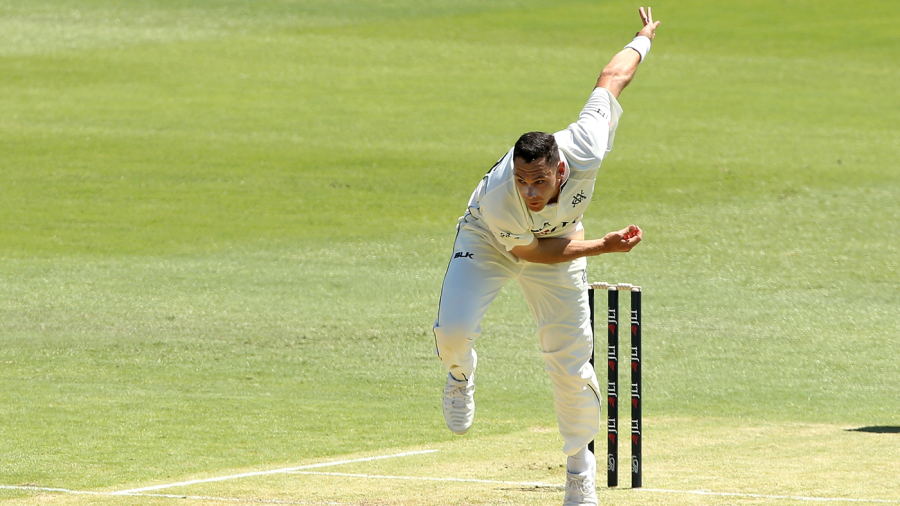 Victoria's bowlers have dominated on a wet and windy day in Melbourne to put the home side firmly in control of their clash with Tasmania at the Junction Oval.

Tasmania skipper once again played a lone hand making 86. He has now passed 50 eight times for the Shield season but only has one century.

Wade scored briskly from the moment he entered but watched problems unfold at the other end. Doolan was given out lbw in strange circumstances for 30 when he shuffled across his stumps and the ball flicked his pad before going past leg stump, but the umpire deemed he was out leg before to Boland. The big quick then delivered a brute of a short ball to Jake Doran who fended it to slip.

Wade kept motoring reaching 72 at a run-a-ball but then he slowed significantly with the loss of Ben McDermott who was out chipping a simple caught and bowled chance back to Jon Holland.

Wade fell to Chris Tremain after scoring just 14 runs from his last 56 deliveries as Victoria strangled the Tigers. Jarrod Freeman fought hard for 22 from 60 balls in just his second Sheffield Shield match before Fekete found his outside edge. Boland had Jackson Bird caught and bowled leaving Sam Rainbird was 25 not out at stumps with the Tigers still 220 runs behind with two days to play.

Earlier, Gotch fell seven runs short of his maiden Sheffield Shield century. He reached 93 as Victoria added 78 to their overnight total. Boland and Holland fell in the first nine overs of the morning leaving Fekete to help Gotch reach three figures. The pair added 63 in 62 balls with Fekete contributing just one run before Gotch was caught in the gully off Rainbird. Riley Meredith finished with four wickets for the innings.

No need for India to have fixed batting positions - Kapil...

John McEnroe: 'Bjorn Borg was almost a god, like Roger...

Canada’s Kouadio not lacking in inspiration

Worcestershire comfortable at Leicestershire, thanks to centuries

Chief explains why Laver Cup got introduced on the ATP...

In an email the ATP Chief Executive Chris Kermode explained the reasons why the...

Rain washes out final session after Jamieson shines with...

Rain washes out final session after Jamieson shines with ball

Queensland managed a small first-innings but could face a tough chase in conditions...

Australia through, another clean sheet for Brazil