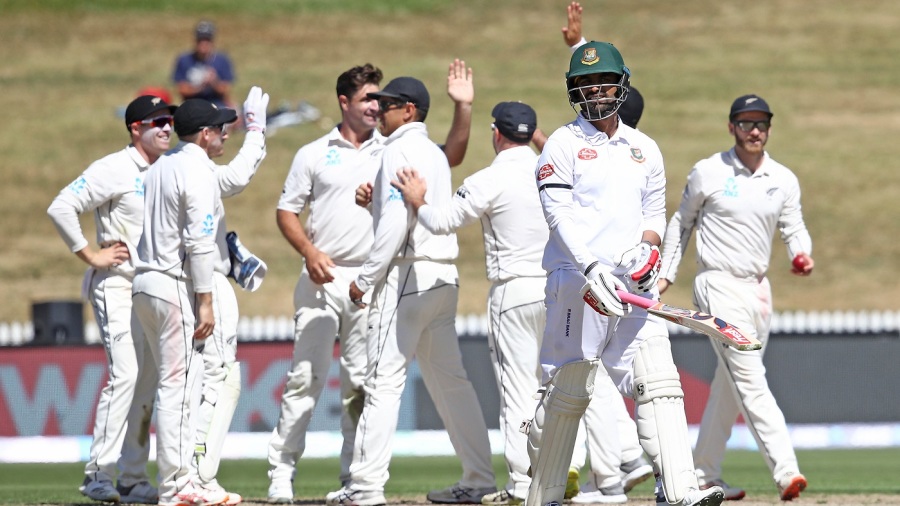 New Zealand have almost everything in place in Wellington to wrap up the Test series against Bangladesh. They have the pace attack, which has already sent a stern message across to the visiting batsmen. They also have the firepower in batting, the record-setting 715 for 6 in the Hamilton Test proving to be the difference between the two sides. They will, however, be wary of rain in the forecast, and the slim chance of a Bangladesh fightback.

Bangladesh have essentially three positives from the Hamilton Test. Tamim Iqbal scored 200 runs in the game, which included his first century in New Zealand. It was an instructive effort from the senior batsman who decided to duck under Neil Wagner's short-ball bombardment in both innings.

Mahmudullah and Soumya Sarkar also batted admirably in the second innings, which was a corrective measure after their soft dismissals in the first. Mahmudullah was more of a supportive act during the 235-run fifth-wicket stand with Soumya, who attacked as soon as he understood how to avoid getting hit on the body. Mahmudullah went on the offensive after Soumya got out, but it was in a bid to make the home side bat again, which would have itself been a monumental effort.

Otherwise, Bangladesh didn't have much to cheer for. Their rookie three-man pace attack conceded 369 runs in 87 overs, taking just one wicket. Ebadat Hossain, who picked up the only wicket, was also unlucky when Soumya dropped Tom Latham before he had opened his account; the New Zealand batsman ended up making 161.

Mehidy Hasan also had a poor outing, his 2 for 246 the worst figures by a Bangladeshi bowler in a Test innings. There will be a lot of improvement needed from the bowling attack if they are to at least challenge the New Zealand batsmen.

The New Zealand trio took 19 out of the 20 wickets that fell in Hamilton, mostly with short-pitched deliveries that rattled the Bangladesh batsmen. Whether Wagner will be able to do it again in Wellington is something the Bangladesh line-up will keep a close eye on.

New Zealand's batting, too, built a lot of pressure on the Bangladesh attack, with Latham and Jeet Raval getting hundreds while Kane Williamson reached his second double-century. Henry Nicholls, Colin de Grandhomme and even Wagner contributed with the bat.

Given the nature of the Wellington pitch, the Bangladesh batsmen will be wary of Neil Wagner's bouncer barrage, especially after he picked up a five-wicket haul in Hamilton. Wagner's energy levels are unusually high, which is bad news for the visitors.

Soumya Sarkar's maiden Test century came nearly four years into his Test career, and it was almost as promised: filled with attractive shots. The spotlight will be on Soumya to see how he follows up the 149 in Wellington.

If New Zealand go for an all-pace attack, legspinner Todd Astle may have to make way for Matt Henry, although Kane Williamson may opt for a bit of variety.

Tamim is currently nursing a groin niggle, but Bangladesh are unlikely to tinker with their batting line-up, mainly because they don't have a spare batsman. Mustafizur Rahman will be coming in, possibly in place of Mehidy Hasan Miraz.

Basin Reserve is - quite literally - a green strip in between three brown pitches, which is likely to help the fast bowlers. Rain has also been forecasted for four of the five days.

With his 146 in Hamilton, Mahmudullah now has three centuries from Bangladesh's last three Tests.

Trent Boult's 5 for 123 was the most expensive among his eight five-wicket hauls.

\"We haven't batted first a huge amount this summer so if we do I'm certainly looking forward to doing that and taking that challenge on.\"

Canada hands over to France

Alex Carey keeps his focus on runs and catches amid talk...

A taste of a dream for Ecuadorian trio

Lahore Qalandars should be renamed as Lahore Badshahs:...

Tom Latham to captain depleted New Zealand side in Australia

The majority of New Zealand's World Cup squad are playing in the IPL in the build-up...