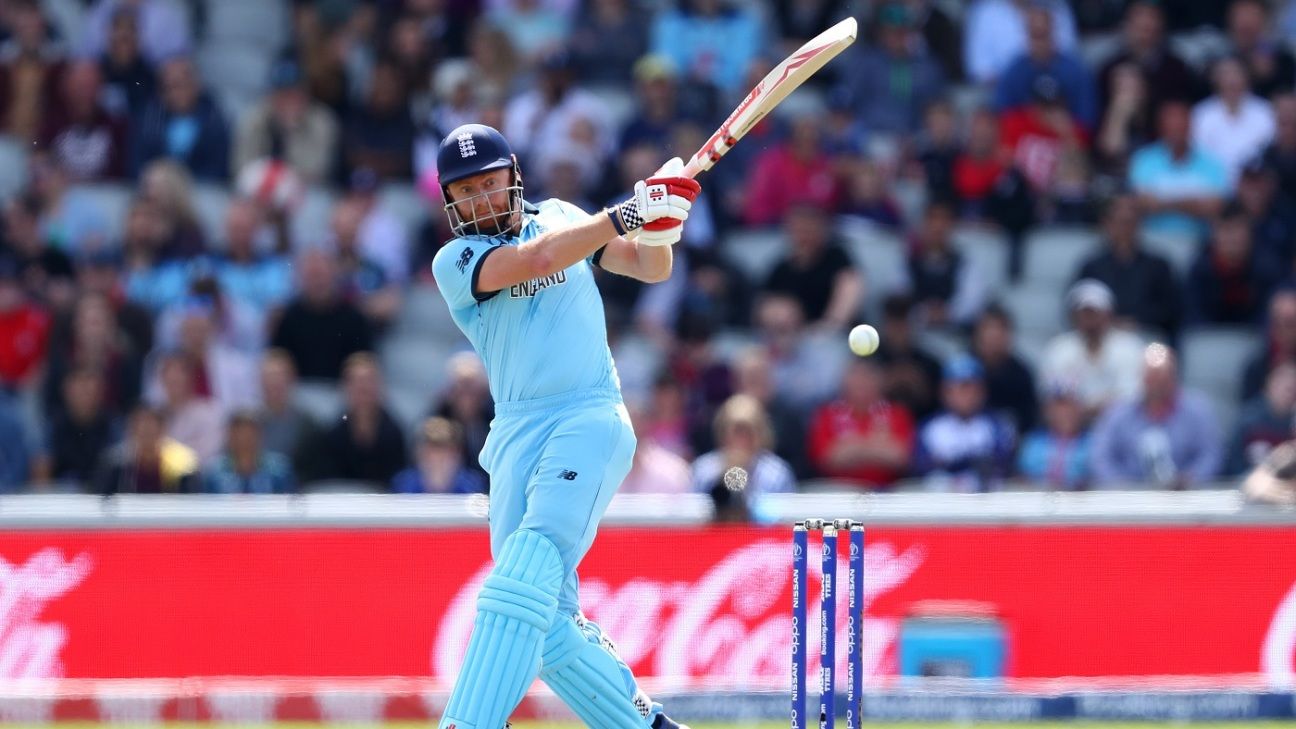 has a message for England's players, fans and critics: keep calm and carry on.

After three defeats in the World Cup so far, including in their last two matches, Bairstow and his team-mates have heard the criticism - from taxi drivers to commentators and former players. But he says they are not letting any negative noise in and will continue to stay "true" to themselves as they face crunch clashes with India on Sunday and New Zealand on Wednesday.

"I was on the radio this morning. I was surprised with a clip of [Michael] Vaughan's comments at 8.30am. Bloody hell. That's pretty rich," Bairstow said. "Because we've done so well, any opportunity for someone to see we've lost two games, they were always going to jump on it.

"People were waiting for us to fail. They are not willing us on to win, in many ways, they are waiting for you to get that loss, so they can jump on your throat. It's a typical English thing to do, in every sport."

"Just because we've lost two games - yes it's in a crunch tournament - and people start talking, it's not going to change the way we go about it. We just have to be relaxed"

In the wake of England's loss to Australia on Tuesday, Vaughan suggested bowing out at the group stage would mark their worst World Cup campaign, while Kevin Pietersen criticised Eoin Morgan, saying the captain was "backing away" from Mitchell Starc's bowling.

Having failed to chase down seemingly achievable targets in their past two matches, England now need to win their two remaining group matches to be absolutely certain of making the semi-finals.

"The comments and things like that, you can give it too much air time and then all of a sudden, before you know it, it's a big thing and it's actually really not," Bairstow said. "We've not let that in. Because the way we go about it and the way we play, it doesn't make a difference what's been said here, what's been said there.

"We've done it for such a long period of time and this group has been together for near-on three years now, if not longer. So just because we've lost two games - yes it's in a crunch tournament - and people start talking, it's not going to change the way we go about it. We just have to be relaxed. The more you tense up, then the more you're going to go into your shell and therefore not play how you've been playing."

After 's assessment that England's batsmen they had encountered during the tournament, Bairstow admitted they had been caught off guard by the state of World Cup pitches, which haven't yielded the big totals many were expecting based on recent seasons.

"None of the pitches throughout the whole tournament have been as true as they have been previously - whether that Pakistan series or last summer," Bairstow said. "Whether that's dictated by the weather, the ICC or whatever you want to put that down too - I have no idea. But the scores have not been as high as they have been over the last two years in England. Look at the ODI results over the last two years.

"Yes the overheads were different. But they're not the typical wickets we've been playing on over two-and-a-bit years. That's just factual... but I'm not making excuses, we've not played well enough to beat sides when we should have done."

Bairstow acknowledged that England had "messed a couple of games up" but they were acutely aware of what was needed at Edgbaston on Sunday against a well-supported India, who have now won five of their six matches with their clash against New Zealand washed out.

"It's going to be interesting against India, we obviously know the following that they've got and it should be a cracking atmosphere," said Bairstow, speaking after visiting a Chance to Shine school as part of Yorkshire Tea National Cricket Week. "Last summer we played really good cricket against them and we won that series and we won it well so I think we go about it the same way we went about it and have been going about our cricket. Our method doesn't change.

"Granted we've lost a couple of games but all of a sudden if you go striving for different things from what have stood you in good stead over a period of time then you're searching for something that you are probably not going to find the answer to. Whereas the formula we've had has got us to where we have been.

"Yes, we've had a couple of lapses but if we'd have had those lapses six months ago it wouldn't have been quite as much of an issue. But we've had them at the time we have and we've got to bounce back."

Yorkshire Tea and national charity Chance to Shine are inspiring thousands of children to play, learn and develop through cricket. Donations to the charity are being matched £ for £ by Charity Patron Adrian Beecroft, support today at chancetoshine.org/donate

Ellis: It's been an amazing journey

"If you get good pace behind the ball and just put it in the right areas, you can...

Stuart Broad "still living for" The Ashes, even if he misses...

The rise of Raheem

Tennis: Johnson hopes adding a familiar place to his team will help him rediscover...