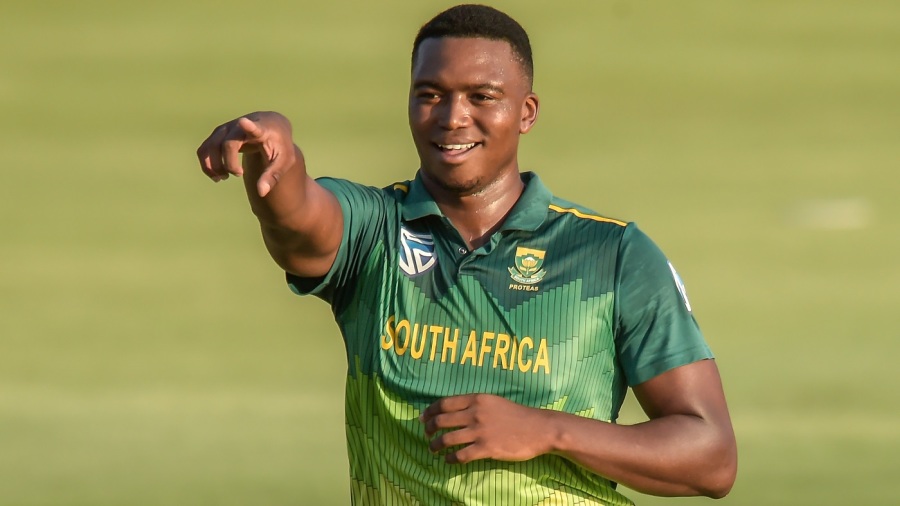 South Africa lost 6 for 31 this afternoon, but the hosts' bowling attack then reversed the treatment to dismantle Sri Lanka's chase under lights at Centurion. Kagiso Rabada led the attack with 3 for 43 and Lungi Ngidi, Anrich Nortje and Imran Tahir all struck twice as the visitors collapsed from 92 for 3 to 138 all out in pursuit of 252. On a pitch that encouraged both seam and spin, South Africa had also been bowled out short of their full complement of overs, and were thankful for Quinton de Kock's 94 and Faf du Plessis' 57 as Sri Lanka's bowlers, lead by Thisara Perera's 3 for 26 in his 150th ODI, also shared the wickets around.

Had Niroshan Dickwella and Avishka Fernando been able to set aside quick runs and simply survive Rabada and Ngidi's opening bursts, the job would only have become easier for Sri Lanka on a pitch that remained generally good for batting - cracks aside - throughout. But the visiting openers instead sought to go after the new ball, without much success.

Dickwella backed away into a wild, top-edged pull that was safely pouched by de Kock in the third over - Rabada's 100th ODI wicket - and Avishka swiped a four and a top-edged six before he was bowled swinging across the line at Ngidi not long after. Rabada bowled what could be his fastest spell of the summer with the new ball, reaching speeds of as much as 151.8kph.

Nortje didn't find the dry track at the Wanderers on Sunday much to his liking, but there was a little more pace in this pitch and he was off to the perfect start when he found the leading edge of Kusal Perera's bat with his first ball of the evening. While not quite as quick as Rabada, Nortje topped out at 148kph in his first spell, and also played his part in the field.

His direct-hit from short third man found Kusal Mendis short of his ground and run-out for 24, with the batsman furious at the miscommunication with Oshada Fernando that brought his downfall. Oshada soon joined him in the dressing room, trapped lbw by Nortje with Sri Lanka in the mire at 92 for 5.

When de Silva chipped Rabada tamely to du Plessis at midwicket Sri Lanka were six down, and South Africa forced the issue by bringing in a slip and a short leg in and coming around the stumps at Akila Dananjaya. Imran Tahir then got to work on the lower order, a double-strike in his eighth over further denting Sri Lanka's chase.

Thisara Perera holed out to deep cover the ball after he had slogged Tahir onto the grass banks over midwicket, and Kasun Rajitha was pinned in front by a quick googly first ball. Rabada and Ngidi returned to deliver the last rites, with South Africa field-testing David Miller as a back-up wicketkeeper as the match reached a swift conclusion.

South Africa's innings had collapsed in similar fashion this afternoon, but the hosts had been given a strong start by de Kock, who missed out on another possible hundred but put together a 91-run opening stand with Reeza Hendricks. He looked set to reach his first limited-overs hundred of the summer when an expansive swipe into the leg side brought only a top edge that was easily snaffled by Dickwella behind the stumps. Du Plessis kept the score ticking over with his half-century, but his dismissal sparked a collapse as South Africa slipped from 220 for 4 to be bowled out with almost five overs of their innings unused.

De Kock burst out of the blocks with four boundaries in the arc between backward point and wide long-off in Vishwa Fernando's first over. He thrashed 11 boundaries inside the first Powerplay, raising a 36-ball fifty - his 20th in ODIs and sixth against Sri Lanka.

Hendricks' departure in the 15th over barely slowed de Kock, and with back-t0-back boundaries off Akila he motored through the 70s. Then he took Dhananjaya on, plundering 15 from his second over of the innings. But with a 14th ODI ton in sight, he fell against the run of play to give Sri Lanka the opening they were searching for.

Rassie van der Dussen came and went for just 2, while Wiaan Mulder batted in fast-forward, hitting the first four balls he faced to the boundary, but was then bowled around his legs by Vishwa to leave South Africa wobbling at 176 for 4.

Du Plessis and David Miller shored up the innings with a 44-run stand, du Plessis raising his fifty and going past 5,000 runs in ODI cricket in the process. But his dismissal, bowled by a delivery from Thisara that kept low in the 37th over, started the slide in earnest.

In the space of just under nine overs, South Africa's lower order collapsed in a heap. It had been expected that conditions here would suit the side batting second, and all the indications were that South Africa were 30 or 40 runs short of where they could have been. But the all-round brilliance of their bowlers meant that their 251 was plenty, and they will go to Durban 2-0 up.

HBL PSL is very important for the World Cup: Misbah

Jordan: We were worthy winners

Mao: I didn't know I was on the verge of history

Roger Federer: 'Rafael Nadal always had the answers on...

Confusion in French football over whether league should...

Confusion in French football over whether league should resume