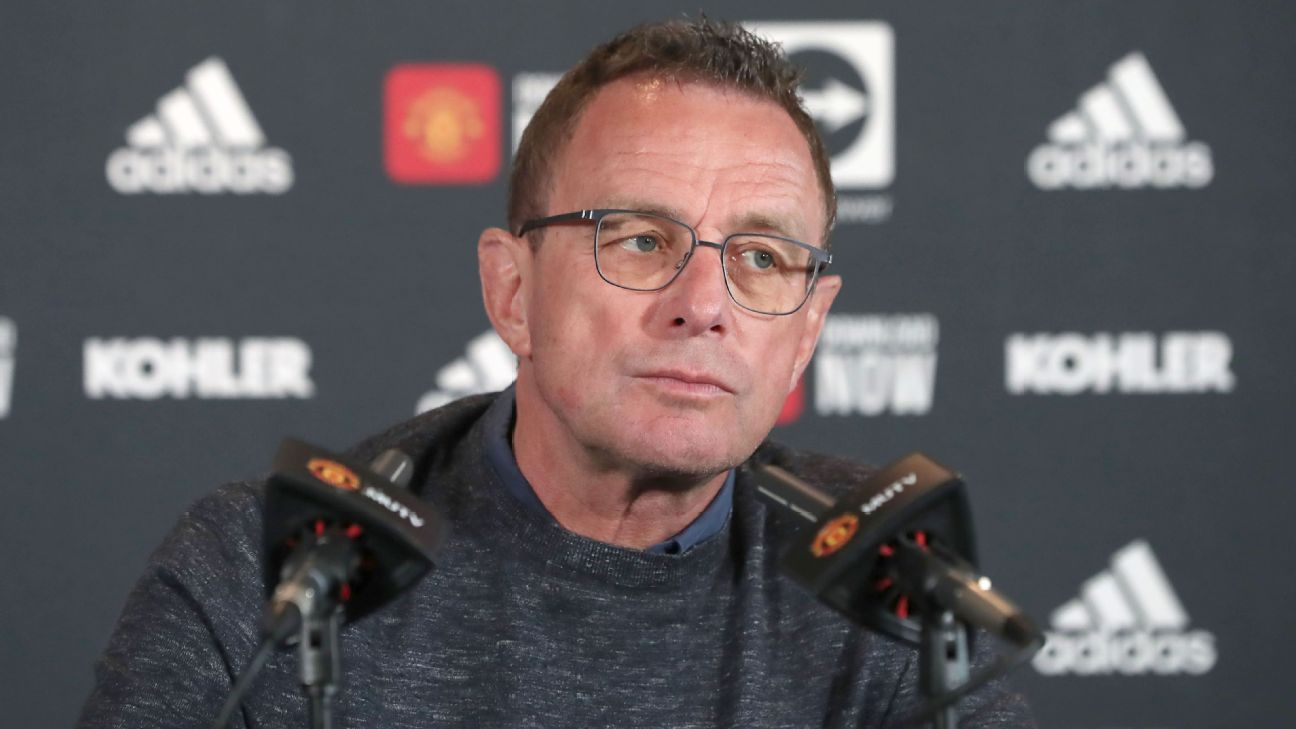 Ralf Rangnick says he has "no regrets" about taking the manager's job. The German heads into Saturday's Premier League clash with Norwich at Old Trafford having won just three of his last 12 games in charge.

It has left United facing the prospect of missing out on a place in next season's Champions League but Rangnick insists he does think taking the job was a mistake.

"No, no regrets whatsoever," he told a news conference on Friday.

"I would do it over and over again. I don't regret that at all as a manager. You always have to question and ask yourself what you could have done better, if I could have played with a different formation in certain games, if a substitution could have been done earlier.

"This is what always happens, we always question ourselves, what we could have done better.

"I think we are all aware it's not an easy squad, the whole situation was not easy or I would not be sitting here and Ole would probably still be here. Again, I think we have shown in the past couple of months we were able to raise the level but not in the same sustainable way that I would have wished. That's the reason I'm not happy at all with what we've done and achieved so far."

He has already passed on his opinion of the squad to the board ahead of the arrival of the next permanent boss and suggested one or two of his players have struggled with the level of expectation at Old Trafford.

"It might be with one or two or three of our players," said Rangnick.

"It seems to be like that, that the level of expectation is high and some of the players seem to struggle with their own performance with that.

"But, again there are no alibis and no excuses, we have to be ready to cope and deal with it."

United supporters are as they attempt to step up the pressure on owners, the Glazer family.

Part of the plan involves remaining outside the stadium for the first 17 minutes of the game -- one minute for each year of Glazer ownership -- but Rangnick is hopeful fans will still get behind the team once they're in their seats.

"The support of the fans has been massive, no matter if it's home or away," he said.

"So far we haven't had that situation where they turned their emotions against the team. I can understand it, it's a game of passion and emotion.

"I don't know what they have on their mind but I've heard they want to come 17 minutes late for 17 years. Even if they do that then after those 17 minutes hopefully they're still backing the team and getting behind us.

"But how much they do that depends on what we show on the pitch so it's a game of give and take. We cannot expect them just to support us no matter what's on the pitch."

It's Klopp vs. Guardiola again: This is how the rivalry has played out

Banini: We’re used to battling, it’s made us strong

Sourav Ganguly 'happy to see normalcy back' as tickets...

BCCI president also confirms that day-night Tests would be played in every home...

I deserved the right to take Pakistan into T20 World Cup:...

I deserved the right to take Pakistan into T20 World Cup: Mickey Arthur

Vilda: Spain were heroic in defeat

Bangladesh cricket team to donate half of their salaries...

Bangladesh cricket team to donate half of their salaries for coronavirus