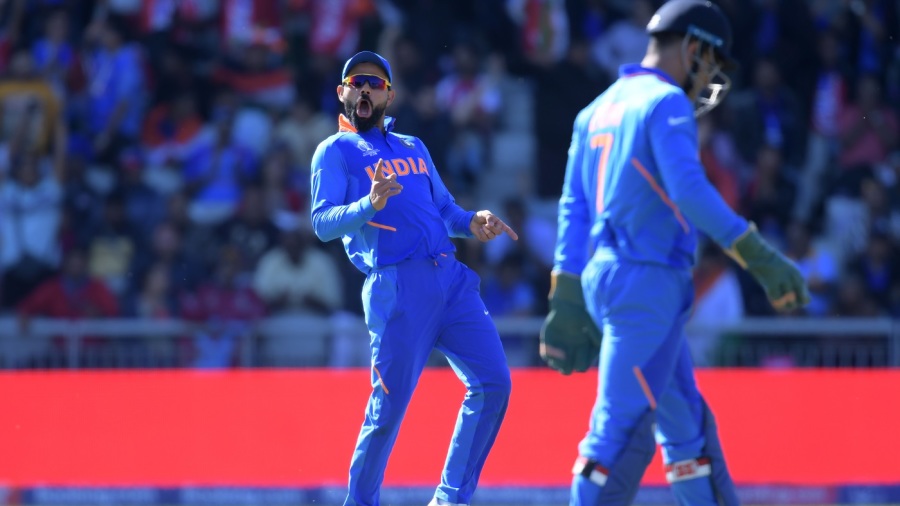 India's bowlers nullified yet another middling batting performance, pounding West Indies into the ground long before they could think about any reasonable comebacks. Having elected to bat, India were kept in check by some disciplined seam bowling from West Indies, whose wickets through the middle overs gave India their second consecutive bout of existential dread surrounding their middle order. But a solid 72 from , who became the fastest to 20,000 international runs in the process, and timely, staggered attacks from and gave India 268. then took four, was practically unplayable, and the others chipped in as West Indies became the latest team to crash out of semi-final contention.

Watch on Hotstar (India only):

Shami, the hat-trick hero from India's last game, was at his attacking best once again. He had Chris Gayle swiping to mid-on, and followed it up by nipping a length ball past Shai Hope's defences to hit off stump. At 16 for 2 in seven overs, West Indies had seemingly already gone off the rails. A laboured 55-run stand for the third wicket between Sunil Ambris and Nicholas Pooran took up 12 overs and had the required rate breach run-a-ball territory early in the innings. To this context were thrown India's middle-overs bowlers, with all their variations. Hardik, Kuldeep Yadav and Yuzvendra Chahal, and West Indies were simply outdone. Ambris was trapped in front, Pooran holed out at long-on, Jason Holder was expertly done in by Chahal, driving to a strategically placed extra-cover fielder, and Carlos Brathwaite was taken by Dhoni, diving one-handed to his right, on what was a below-par wicket-keeping day for him.

Watch on Hotstar (India only):

For the most part, Dhoni seemed to be having a below-average batting day as well. Coming in at No. 6, after the promoted Kedar Jadhav had fallen cheaply, Dhoni had time to play in his preferred patient style. At 140 for 4, Kohli was at the other end - a power pair. But with the prospect of Shami at No. 8 and more than 20 overs to play, India were forced, once again, to play within themselves. Dhoni, however, strayed out of his crease and looked to hoick Fabian Allen over midwicket in the 34th over, only to miss and give up on getting back. But Hope spilled the ball, missed the stumping chance, and in his funk from that moment, failed to gather the ball and run Dhoni out as well. It would come back to haunt his team.

But the effects of Shikhar Dhawan's injury were clearly still in play for India. When India bat well, it is usually on the back of a big partnership for at least one of their first two wickets. With Rohit Sharma having fallen early, KL Rahul and Kohli were on their way to setting up such a stand. But for the fourth time in five innings, Rahul was undone by his shot selection. Having punched, driven straight, and pulled with control, he went across the line to a length ball slanting into him and was bowled for 48.

To their credit, West Indies did have good control at that point. All short bowling had been punished early on, but Holder quickly put a stop to the hitting with a simple plan - bowl an off-stump line. He began with two maidens, and barely bowled a single ball in line with the stumps during his first few overs. Kohli, especially, could do little against him, and would eventually fall to his opposite number trying to drag one into the leg side from wide outside off. In the middle, though, it was Kemar Roach who reaped the rewards.

He emulated Holder's strategy and straightened one past Vijay Shankar, who the spotlight keeps following at No. 4. Jadhav's push up to No. 5 was also struck down with that ploy, and suddenly India's big-hitters needed to be smarter with their plans.

In Hardik's case, this meant keeping the slogs out till the last eight overs of the innings, without compromising on his scoring rate. He was the only batsman - barring Sheldon Cottrell later - who struck at a rate greater than 100, despite hitting only five boundaries during his 38-ball 46.

For Dhoni, it was hobbling to 40 off 55 at the start of the 49th over. Oshane Thomas hit the blockhole thrice in the last over, and none of them cost any runs. But his decision to also bowl three short balls took India from 252 to 268. Dhoni finished unbeaten on 56, and West Indies were left ruing their choices at the death.

The most noteworthy moment early in India's innings was Rohit's dismissal. He was given out caught behind off the inside edge on review. Rohit's disbelief was blatantly evident, a reaction likely prompted by the seeming hastiness with which third umpire Michael Gough overturned the on-field decision. Changing a decision demands conclusive evidence, which Gough seemed to have found relatively early from replays, almost at the first instance of Ultra Edge. While there was a murmur as the ball went past the inside edge, the square angles showed the ball had been between bat and pad when the noise was registered. Front-on angles suggested daylight between bat and ball, and in all, it seemed much too close for a decision made as quickly as it was. In the end, it didn't play too big a part in the result.

Van Dijk: Not everyone has the perfect route to the top

The left-armer is hoping to get three or four spells under his belt during the two-day...