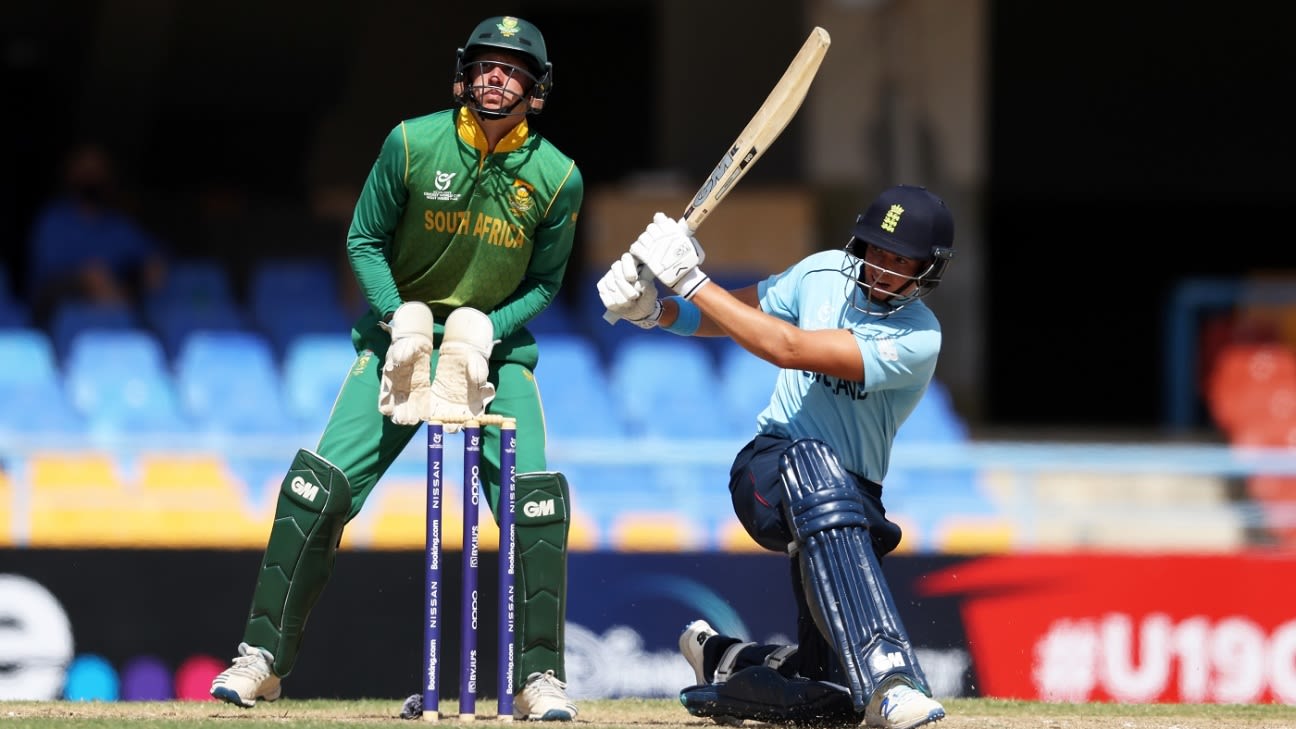 smacked 88 in only 42 balls to make short work of South Africa's modest total and secured England's passage into the semi-finals of the U-19 World Cup. England legspinner took 4 for 48 to bowl South Africa for 209 before Bethell set the tone in the chase, as England clinched with 112 balls to spare.

Bethell scored 76 of his 88 runs in boundaries, hitting 16 fours and two sixes. His blitz took England to 104 for no loss at the end of their powerplay, and even though he fell in the 11th over, his innings allowed the rest of England's batters to sail smoothly over the line. William Luxton, the No. 5, struck an unbeaten 41-ball 47 - including a six to win the game - after Bethell's dismissal.

Bethell had already provided England with a flying start when he struck Matthew Boast for two fours in the opening over, and he went even better in Boast's second over, hitting four boundaries in four balls - two pulls and two drives. A straight hit for four through mid-on brought up his fifty in just 20 balls in the sixth over.

The Barbados-born Bethell, who is England's vice-captain, found the boundary in every over he spent in the middle. He was unafraid to play the reverse sweep and had contributed 83 by the time England's opening stand crossed 100. His success allowed George Thomas, who faced far fewer balls in their partnership, to go at his own pace.

Asakhe Tsaka found the eventual breakthrough, breaking the 110-run opening stand with Bethell miscueing a shot to deep midwicket. Thomas was then run out for 19. Tom Prest, the captain, and James Rew got starts before being lbw off . Luxton, though, extinguished all hopes for South Africa, seeing the chase through with a knock that contained six fours and two sixes, including slog-sweep over deep midwicket in the 32nd over to help England breach their target.

Even though Bethell's innings, which came at a strike rate of 209.52, expedited the win, England's position in the contest was set up by their bowlers, led by Rehan's four-for. He first had South Africa captain George Van Heerden top-edging a sweep before rattling Andile Simelane's stumps with a yorker. He followed that up with the wicket of Michael Copeland to leave South Africa 136 for 5, before returning to take the final South Africa wicket and finish with 4 for 48.

That South Africa reached 209 was courtesy the tournament's most consistent batter. Brevis had struck 65, 104 and 96 in the group stage, and in the quarter-final he played a lone hand of 97. Coming in at 11 for 1, he began attacking from the start, and ended up hitting nine fours and four sixes in his 88-ball innings. He was the only batter who dominated England's bowling, using his strong build to go over the top too. After he fell three short of his second century of the tournament, No. 9 Boast (22) and No. 11 Asakhe Tsaka (18) lifted South Africa to 209.

England will now face either Sri Lanka or Afghanistan in the semi-final.

Over at the Plate quarter-final in Diego Martin, West Indies opener hit a 134-ball 128 to give them a over Papua New Guinea.

Nandu first put on a 155-run opening stand with Shaqkere Parris, who made 64, before following it up with a 107-run third-wicket stand with Kevin Wickham (61*). That took West Indies to 298 for 3. By the time Nandu fell in the 49th over, and despite losing five more wickets in the last ten balls of the innings, West Indies finished on an imposing 317 for 7.

The six West Indies bowlers then bowled PNG out for 148, with extras (34) being the highest contributor in the chase. Aue Oru, the No. 6 was not out on 27 with six PNG batters finishing with single-digit scores. Nandu, high on confidence after his 128, then returned as the pick of the West Indies bowlers to take 2 for 14 in his six overs of offspin.

In the Plate quarter-final match in Port of Spain, Zimbabwe completed a too, defeating Scotland by 108 runs. Connor Mitchell and legspinner David Bennett took three wickets apiece to bowl Scotland out for 140 in their chase of 249.

Zimbabwe's innings was set up by the 78 from opener Matthew Welch and Brian Bennett's 54 from No. 4. Before his three-for, David Bennett scored a handy 41-ball 35, and despite a lower-order collapse, the hosts finished on 248. Welch, who scored seven fours and a six in his 117-ball stay, put on 112 for the second wicket with Brian Bennett to lay the foundation in the Zimbabwe innings.

Scotland lost five wickets by the time they reached 102. Mitchell then ran through the lower-middle order with three scalps, and David Bennett cleaned up the tail to end Scotland's challenge in the 39th over. Tomas Mackintosh (25) and Jack Jarvis (24) top-scored in Scotland's 140.

India should have only five Test centres - Virat Kohli

Peter Johnston believes a lot of fans will come to watch Kyrgios in Kooyong.

A challenge between two champions with two incredible and luxurious assets: Roger...

Naseem Shah: 'Had to bowl our hearts out' to get life out...

The fast bowler used his pace and the lack of bounce on the pitch to prise out two...

Joe Root moves to No. 3 in Test batting rankings, Virat...

Rachael Haynes and Jess Jonassen played starring roles with bat and ball in a 71-run...

Australia Test squad: who has staked their claim for a...

A host of players have produced impressive performances in the first stage of the...

Tennis - Djokovic became the second player in the Open era with 300 victories at...