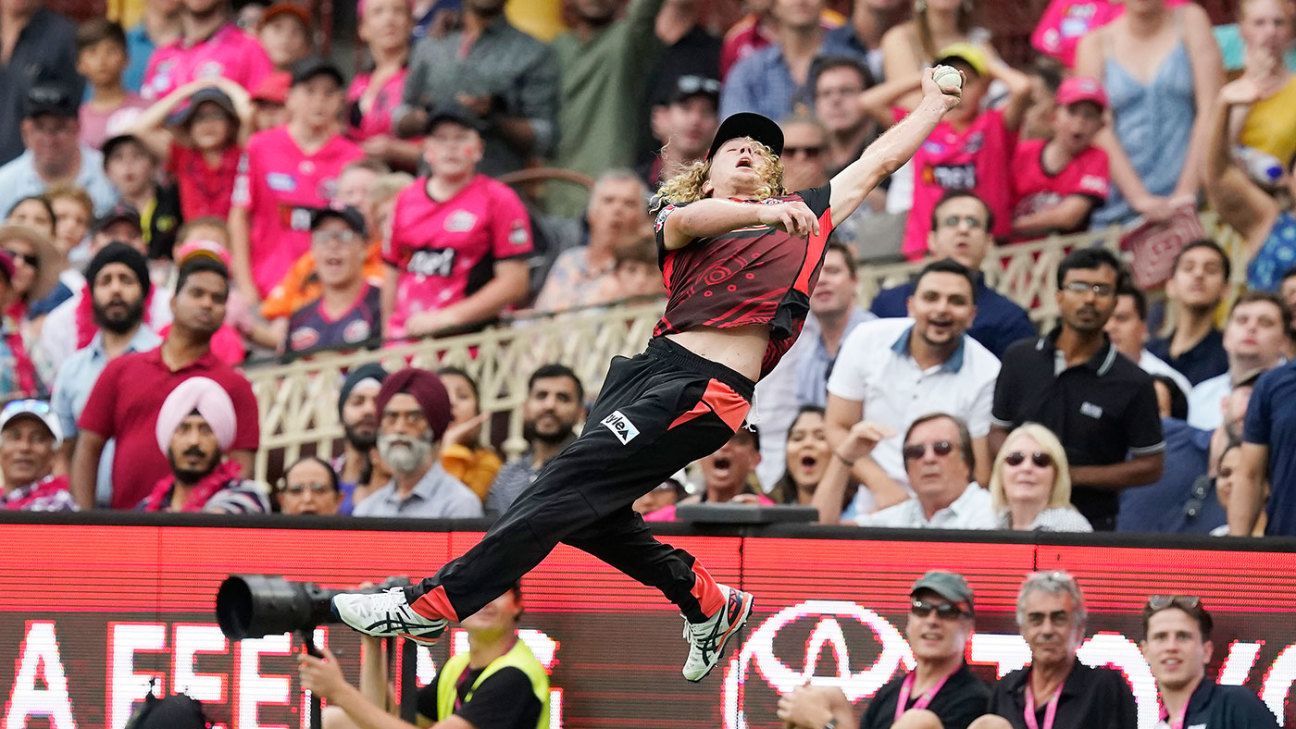 One of the Big Bash League's principal architects, Anthony Everard, has called for a dose of reality in assessments of the tournament amid and prospects for further success, pointing to figures that underline its place as the most watched domestic league in Australia.

At the same time, Everard acknowledged that the exponential growth of the BBL in its early seasons, where its broadcast and attendance figures shot up in huge clumps each season to a peak in 2016, had not been a sustainable growth pattern. The decision of Seven and Foxtel to shell out up to half of their A$1.18 billion broadcast deal with Cricket Australia for the tournament demonstrated a level of optimism that has not been matched by subsequent audiences for the bloated 14-game season.

OzTam average figures collated between Seven and Fox Sports for the ninth edition of the BBL delivered an average national broadcast audience of 645,000 per game, as opposed to averages of 461,000 for the AFL and 459,000 for the NRL for their respective 2019 winter seasons. Audiences for the football codes have risen in the Covid-19 affected 2020 season, and Everard suggested that there was no reason the BBL would not benefit similarly from viewers needing "escapism" amid the tumult of this year.

CA formally announced on Friday that the governing body had renewed and expanded its sponsorship deal with KFC, a relationship largely geared around T20 and the BBL naming rights, but also featuring tie-ins with the WBBL and the women's national team. There had reportedly been interest from other suitors, notably McDonald's, before CA opted for the continuity and goodwill of maintaining the KFC link.

"Things are never as good or as bad as they seem to be," Everard told ESPNcricinfo. "We're aware of the narrative, but you've got to separate fact from fiction, and if we want the facts, the BBL is the highest rating sports property in Australia on free to air TV, and the numbers are there for all to see. It remains one of the most popular, indeed dominant domestic sports leagues in Australia over the summer period, and we've received enormous votes of confidence on that and the KFC extension is no exception.

"My reflections having been involved since day one is this coming summer the BBL will play a more important role in Australia than it ever has in its short history. Without putting too fine a point on it, it's been a pretty average winter for many Australian families; everyone is just desperate to get outside for a bit of light relief, have a bit of fun, and that has always been in the DNA of the BBL.

"We take a serious responsibility that the BBL has an important role to play this summer in bringing back a bit of fun, a bit of joy, a bit of relief and escapism to families, and we're very focused on doing that."

In terms of the competition that Everard had direct control over as head of the BBL before being promoted to the executive in charge of "fan engagement" at CA, under which the T20 tournament squarely sits, he argued that the early rapid growth of its audiences had been a powerful pushback to initial cynicism in many quarters. At the same time, Everard was happy to admit that a plateau of some sort was inevitable, and that the rise in games played by each club from eight to 10 to 14 in a brief period had likely distorted the picture of where exactly it sits.

"Ten years ago it didn't exist, it launched as a 32-game competition with an enormous amount of cynicism as to whether or not it was the right decision or whether it would survive," he said. "It then grew in the number of games and for a while there it went on this unsustainable growth trajectory where everything went up by 20% year-on-year, which in my mind was never going to be sustainable in the long term.

"As it stands today, it seems to have plateaued with significant TV audiences up around 7-800,000, it's plateaued with an attendance of more than a million people through the gate every summer. Yes, the average attendance has varied from year to year, and in the last couple of years it has even come down a bit, which in part is a reflection of the extra games, but also some of the venues.

"We absolutely respect Aaron's perspective, he's been a big part of the BBL over the years, so no dramas at all with his observations" Anthony Everard on views of Australia captain

"But we've got to play the long game, and in the same way we tried really hard not to get carried away through those years of 20% plus growth, we can't afford to just take a year on year view as it stands at the moment. The sport is evolving, the fundamentals are very sound, and not only have we added some extra men's games, we've added a whole new women's competition that is finding its feet."

The former Ten and Seven executive Dave Barham was commissioned to deliver a high profile review of the tournament this year, and his views were more or less backed up by the Australian limited-overs captain in terms of its number of games.

"We absolutely respect Aaron's perspective, he's been a big part of the BBL over the years, so no dramas at all with his observations," Everard said. "BBL is not unique, like any other league or business it will go through periods of significant growth, stabilisation and in some instances decline. The important thing is understanding what are the key elements, for better or worse, and being open minded and flexible enough to make the necessary adjustments, which is exactly what we're doing.

"The BBL has been one of the great success stories in Australian sport the envy of many sports, but it didn't happen by chance. We can't afford to lose sight of the fact that it was primarily launched to attract and diversify the fanbase of cricket, so that hasn't changed in 10 years. We just need to be really clear and focused on what does success look like and not wanting to get too distracted by the noise and commentary around us."

To that end, Everard was firm in maintaining that CA was not interested in testing the market for private investment or ownership of the clubs or the league as a whole, stressing that the control the governing body exerted over its scheduling and planning was critical to keeping the BBL in its rightful place alongside international and state-based domestic cricket.

"One of the great things having been involved with it in the early years is we had absolute autonomy and full discretion in terms of our decision-making," he said. "That was around decisions we thought that were in the best interests of the BBL as it related to strategic imperatives as opposed to just commercial growth. As things stand at the moment, there's no real burning desire to pursue private equity, but I would never say never, and it's clearly a very valuable commodity so we should probably keep an open mind."

One of the least cited figures in recent debates around the BBL is the fact that broadcast audiences for Test matches were up significantly on both Seven and Fox last summer - evidence that many of those viewers first drawn to the game's newest format may actually be maturing into followers of its oldest.

Smith, Warner return to scene of Sandpaper scandal as 3rd...

Richard Krajicek: I am Grateful For My Life, For Everything...

Tennis - Krajicek says he loves traveling around the world

Pakistan, India series not possible until Modi is in power:...

Pakistan, India series not possible until Modi is in power: Shahid Afridi

The duo combined to pick up 7 for 37 before Liam Livingstone took Karachi Kings...

Shadab Khan ruled out of England series with virus

PCB enforces WHO SOPs against COVID 19 at Gaddafi

PCB enforces WHO SOPs against COVID 19 at Gaddafi

Nicholas Pooran's eye-catching fifty a highlight for home side but England take...