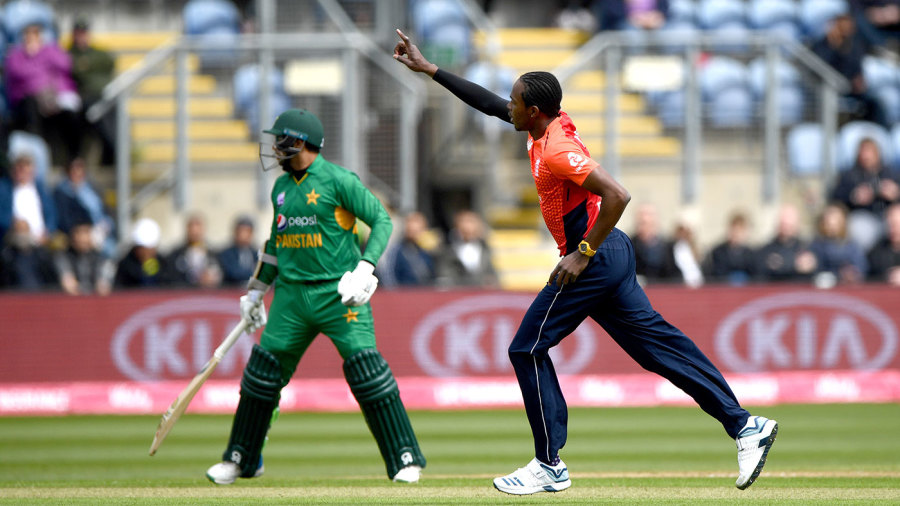 So the prologue is done and dusted - with England picking up two wins out of two in a pair of vastly contrasting contests over the bank holiday weekend. First, they held their nerve on a claggy dog of a deck in Malahide to seal a low-scoring cliffhanger, the like of which 's men have all too often lost in the past. Then in Cardiff a couple of days later, the one-off T20I against Pakistan served up a more familiar boundary-laden bunfight, sealed with aplomb - and a rare outbreak of emotion - by the skipper's unbeaten half-century.

And now on to … what exactly? It's clearly not the main event of the summer - not even close - but these five ODIs against Pakistan are about as far from an irrelevance as bilateral one-day contests come. They offer, at the eleventh hour of England's four-year World Cup build-up, a chance to build confidence, finalise squad members, hone plans, and re-enter the head-space of World Champions-elect, a mindset that England - whether it tempts fate or not - will need to occupy if they are to be the last team standing come July 14 at Lord's.

Not that their opponents have habitually taken such a focused route to global riches. At the 2017 Champions Trophy, as at the 1992 World Cup, Pakistan perfected the art of peaking at the right time (an aim which England has invariably shared in their previous 11 campaigns, but never with anything like the same success…).

On both occasions, Pakistan translated shambolic starts into glorious finishes, scooping the spoils with irresistible displays of pre-ordained bravado - the sort of warrior-frenzy that scatters the mindset of teams that can only play to a plan. That's where England will need to be different this time around, and why playing against a team of natural-born mavericks could be crucial to their fine-tuning in the weeks ahead.

That said, Pakistan come into the contest with a pretty shocking recent record in 50-over cricket. They were shellacked 5-0 by Australia in the UAE in March, and have won just twice in ten attempts since the start of 2019, both of those coming in a 3-2 series loss in South Africa.

The Australia series, however, featured a much-changed team - , the captain, was one of many senior players absent, with Shoaib Malik taking charge instead. This time, they too have arrived with 17 names to be boiled down to 15, so there's plenty incentive for self-betterment among the chosen names.

With any luck, the media frenzy will have died away by the time the World Cup actually begins, and can just get on with being very good at his job (for he will shortly be in the final 15 … won't he?) But, until then, his every move is sure to be over-analysed. So, to recap, he was a bit of a curate's egg on a nervy debut in Malahide - loose in his opening spell, but sharp when he returned mid-innings - and then at Cardiff, restored to his more familiar 20-over surroundings, he was a game-changing menace each time he was thrown the ball. So, combine the two experiences for his 50-over home England debut, and we'll be one step closer to knowing if he's ready to make that final step up.

For both sides, this series is as much about men currently outside the World Cup 15. There was a lot of energy spent discussing 's absence from the preliminary Pakistan squad last month, and there are no guarantees he will be in the XI that takes the field in this first ODI. But Amir has history of making good use of English conditions and, at least in theory, should be fired up to prove his case after apparently falling behind 19-year-old quick Mohammad Hasnain and fellow left-armer Junaid Khan in the pecking order. While Amir has taken a paltry five wickets in ODIs since the 2017 Champions Trophy final, he has had an excellent economy - and who could forget the way he shredded India's top order at this ground two summers ago?

It's a 17-man squad at this stage of England's preparations, and they may need all the depth going to judge by the current injury niggles in their ranks. Jason Roy has not been seen by Surrey for weeks - his back spasm now is officially problematic, so James Vince is sure to get another chance to make his case at the top of the order. Moeen Ali has a rib niggle so Joe Denly has another chance to prove his worth as a frontline spinner. Chris Woakes will have his first outing of the summer in England colours, as will the IPL returnees, Jonny Bairstow, Jos Buttler and Ben Stokes, but Mark Wood is an unlikely starter - he missed his chance to have a work-out on Monday when Durham's Royal London clash with Yorkshire was washed out. Oh, and that Archer bloke may get another opportunity…

Pakistan's main selection issue, perhaps, is whether to give time to the two men on the fringes of their World Cup squad: Amir and . Both were named in the 12 Pakistan will pick from, and there could be as many as nine changes to the last ODI XI they put out, against Australia in March - Imad Wasim captained in that game but Sarfraz is now back to take the reins; Haris Sohail and Yasir Shah are the other continuity candidates, with Abid Ali overlooked for now. The regular openers, Fakhar Zaman and Imam-ul-Haq, should be reunited, while the choice to complete the bowling attack is between Amir and Yasir.

The Oval has seen plenty of high-scoring ODIs over recent years, although England needed No. 8 David Willey to get them over the line chasing 215 against Australia 11 months ago. The pitch for this game looks a bit green but is expected to play pretty well - however, rain is forecast during the morning, clearing later, so there could well be a delayed start.

\"We have a lot of games before the World Cup and the World Cup is the most important thing. They could play if we really needed them to, but they don't need to and it gives us a chance to play some of the other guys.\"
\nTrevor Bayliss on the fitness of Moeen and Roy

\"\"If I have a choice, I don't have that type of bowler I would definitely pick him [Archer]. Because he is quick, maybe he has that X-factor.\"
\nSarfaraz Ahmed joins the only debate in town

Riaz gets into heated altercation with Roy, Sarfaraz in...

Here is a rundown of who each team gets back after Australia finished their brief...

Jones, who commentates around the world, has become the first woman appointed via...

Chile out to flip narrative on global stage

Kane Williamson poised to topple Virat Kohli as No. 1 Test...

New Zealand captain is just seven points behind his Indian counterpart in the ICC...